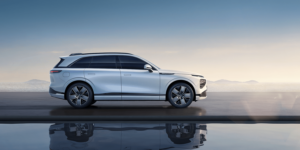 The Chinese electric car manufacturer Xpeng receives a credit line of up to 7.5 billion yuan from the Agricultural Bank of China for the further expansion of its business activities.

This is equivalent to 1.08 billion euros. The money is to be used to support the manufacturer’s growth, according to a Chinese press release from the Agricultural Bank of China (ABC), quoted by CN EV Post. The growth is also to take place increasingly abroad. Only in March, Xpeng had pushed its expansion in Europe with the market launch of its P5 electric sedan in Denmark, the Netherlands, Norway and Sweden.

Not only is it a big loan for the carmaker, but ABC also states that it is the largest credit line granted to a Chinese carmaker to date. The importance and “high appreciation of the bank for Xpeng’s industry position and development prospects” was also evident from the fact that the signing ceremony was personally attended by the president of ABC’s Guangdong branch, Zhu Zhenggang.

“We are very pleased with the agreement, with terms demonstrating the financial institution’s strong trust in our solid business fundamentals and growth prospects,” said He Xiaopeng, founder of Xpeng. “As we pursue rapid technology and product iterations, we will continue to strengthen our product competitiveness and bring compelling EV experience to our consumers.”

Consequently, in addition to the expansion, Xpeng also aims to drive technological development. In 2023, a new generation of the semi-autonomous driving system is to be unveiled, which will be called Xpilot 4.0. In addition, the manufacturer’s fourth model is to be launched in 2023. The G9 electric SUV, shown in November 2021, is intended for international markets.

Xpeng had presented its business figures for 2021 in March. The company is still dependent on such loans, as the net loss increased last year.

Kia presents the Niro Plus for taxi and ride-hailing services