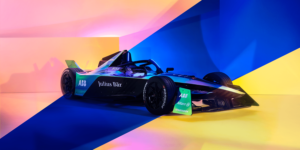 The FIA and Formula E have unveiled the third-generation racing car that will be used in the electric racing series from the coming season. The technical key data differ greatly from the previous vehicle.

With the increased drive power, the top speed also increases: the Formula E racing cars of the third generation are up to 322 km/h fast, previously a maximum of 240 km/h was possible. The recuperation power has increased significantly more: thanks to a new front motor, this is now up to 600 kW. The 250 kW unit on the front axle is a standard component for all manufacturers and may only be used for recuperation. The electric drive on the rear axle is therefore solely responsible for propulsion – the manufacturers still develop this drive unit themselves.

However, the increased top speed is not only due to the performance plus: The Gen3 cars are also significantly lighter, weighing in at 840 kilos. This is partly due to the new battery, but also to the fact that hydraulic brakes will no longer be installed on the rear axle in future – deceleration there will be exclusively by recuperation. Energy recovery has been strengthened for a good reason: at least 40 per cent of the energy used in the race comes from recuperation. The race distance would not be possible with the power stored in the 51 kWh battery at the start of the race alone.

In addition, the Gen3 racing cars are recharged during the race at a short pit stop. There are no details about the charging system yet – only the statements that it should be almost twice as powerful as the current commercial solutions.

The vehicles themselves are still unit chassis designed and built by the French company Spark. The Gen3 cars have ditched the “Batmobile” look of Gen2 and are more reminiscent of other formula racing cars. With the wedge-shaped design and the lack of a rear wing, however, basic elements of the current Formula E cars are still recognisable – yet everything appears more straightforward, for example, the wheels are no longer covered.

The Gen3 cars were presented at an event in Monaco in the run-up to the upcoming ePrix. “With every generation of race car we push the boundaries of possibility in EV technology further and the Gen3 is our most ambitious project to date,” says Formula E founder Alejandro Agag. FIA President Mohammed Ben Sulayem adds: “Both technologically and environmentally, Gen3 sets new standards in the sport. The FIA and Formula E development teams have done a superb job, and I thank them for their hard work on this project.”