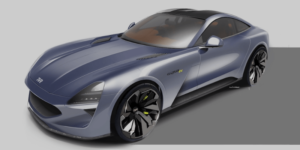 British sports car brand TVR is planning a limited edition all-electric offshoot of its Griffith V8 model for 2024, as well as a second, as yet unspecified electric model.

TVR made the announcement as part of a sponsorship partnership with the Formula E electric racing series. The manufacturer, previously known for its petrol-powered sports cars, will be the title sponsor of the ePrix in Monaco at the end of April and the two races on London at the end of July.

According to TVR, the partnership with the racing series “marks a turning point in the strategic direction of the legendary British high-performance sports car manufacturer as they accelerate their plans to electrify the brand”. However, further details of the electric TVR Griffith, which is otherwise powered by a Ford V8, are not yet known.

It is only assumed that the electric version will be slightly more powerful than the around 368 kW petrol engine. This is to compensate for the higher weight of the battery. In the course of this, there are also supposed to be changed to the chassis tuning to accommodate not only the additional power, but also the lower centre of gravity. How big the changes to the body will be is not known – at least the electric TVR can do without the tailpipes mounted behind the front wheels.

The announcement follows the formation of a joint venture between TVR and South American lithium mining company Ensorcia Metals – without producing its own electric car, such a joint venture would make little sense. The joint venture will serve both to finance the production of the Griffith and to ensure a supply of batteries for future electric TVR models.

TVR is said to be about to move to a new factory near Cardiff, according to Autocar. This is also likely to become the production base for the upcoming electric models. The cars are to be produced there in a particularly lean manufacturing process.