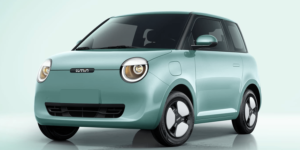 Changan and their electric car brand Avatr, launched last year, have unveiled the Lumin Corn, an all-electric subcompact designed to counter the dominance of the Wuling Mini EV in this segment in China.

The two-door, four-seater electric car is scheduled to hit the Chinese market in the second half of 2022. Initially, two LFP battery variants with 12.92 kWh and 17.65 kWh capacity are planned for NEDC ranges of 155 kilometres and 210 kilometres, respectively. Charging will be exclusively with alternating current via the Chinese GB/T standard. A battery with 27.99 kWh for a range of 301 kilometres will be available later. The engine power of the Lumin Corn is 30 kW, an electric drive with 35 kW will follow later.

The smallest car is based on Changan’s ‘EPA0’ platform, which was developed for compact and city cars. With a length of 3.27 metres, a wheelbase of 1.98 metres, a width of 1.70 metres and a height of 1.55 metres, the Lumin Corn clearly aims at the electric vehicle bestseller Hongguang Mini EV by SAIC-GM-Wuling. Almost 400,000 units of this model were sold in China last year.

However, the Avatr brand, founded in 2021, is taking a different approach to design: the Lumin Corn is emphatically rounded – and not just in the lights. There are hardly any sharp edges. Inside, there are two displays, one for the driver and one for the infotainment – the latter is 10.25 inches in size. The air conditioning seems to be operated via a few buttons. Although the 3.27-metre-long car is a four-seater, there is still a luggage compartment – but at 104 litres, it is small, as expected.