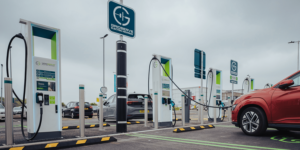 Gridserve and Moto have just unveiled the latest High Power Electric Super Hub on the UK’s busiest motorway. The company says the latest electric vehicles can now add the 117 miles of range required to drive around London’s Orbital Motorway in less than 15 minutes charging time.

The new site at Moto Thurrock is located on the eastern side of the M25 between junctions 30 and 31. The Super Hub features 12 of Gridserve’s EV chargers with the capability of providing up to 350kW of power.

The UK company wants to maximise accessibility for EV drivers that require rapid-charging to tank up quickly on electricity. For this reason, Gridserve Electric Hubs have been designed to feature both CCS and CHAdeMO connectors, while the Hubs accept contactless payment and provide real-time status updates to “a myriad of popular EV charging maps”.

Moto Chief Executive, Ken McMeikan, said: “As a business, Moto is currently on track to deliver above and beyond Government-set targets of six rapid chargers at each motorway service area by 2023. We have seen exceptional usage at our first Ultra-rapid hub at Rugby which opened last year and been thrilled with the hugely positive response from our EV driving customers”.

The deployment of the Thurrock Electric Super Hub represents part of a multi-million-pound investment into expanding the Gridserve Electric Highway. The nationwide EV charging network was acquired by the sustainable energy company ecotricity 11 months ago. Since Moto is the UK’s largest motorway services operator, the partnership has made it possible for Gridserve to deliver four High Power Electric Super Hubs at the company’s sites in just five weeks; Burton-in-Kendal, Exeter, Swansea and now Thurrock. Gridserve also opened its second Electric Forecourt format in Norwich within this timeframe.