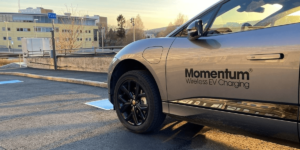 Momentum Dynamics has announced a wireless system that offers the possibility of both high (50-75 kW) and low (7-22 kW) power charging thanks to a “dual power” mode. The company sees this as nothing less than “a major breakthrough with enormous implications for the EV industry”.

This is to change with the “dual power” mode. According to Momentum Dynamics, a vehicle equipped with such a system should be able to charge “at any location and make optimal use of the available energy”. In other words, in addition to “slow” installations with 7 to 22 kW in one’s own garage or in public car parks, it is also possible to use inductive chargers with high power – which are usually built in public spaces.

The user only has to park his vehicle over the charging pad – the system itself recognises the possible power and controls the charging process accordingly. The company now sees the “decisive advantage” in precisely this communication, which runs automatically in the background, and the flexibility gained in terms of charging power.

“The ability to manage any power level with a single device represents a breakthrough that will see the broader deployment of wireless charging and accelerated adoption of EVs,” says Andy Daga, CEO of Momentum Dynamics. “This fulfills our vision to offer a ubiquitous and fully automated charging solution in which the car is capable of charging itself without human action. Charging a car or even a truck should be an effortless ‘background operation’ that no one thinks about – much like electronic toll collection has become. This is the step-change advantage that has been needed to increase the adoption rate of electric vehicles. We are beginning to see demand for hands-free charging as a key element of passenger vehicle electrification.”

The technical breakthrough, according to the company, is the ability to bring to market a charging system for light commercial vehicles that operates at high efficiency at all power levels from 1 kW to 75 kW (comparable to any plug-in charger) and complies with the same electromagnetic standards that apply to all electrical equipment. In addition, the proprietary technology is also designed for a bidirectional energy flow, which would also make inductive Vehicle2Grid applications possible.

Momentum Dynamics has also been a member of the CCS initiative CharIN since last year. In addition, the US company is the supplier for the inductive charging systems for the Gothenburg fleet trial: there, electric taxis from Volvo are being inductively charged on a test basis.

Tesla opens more Superchargers to others