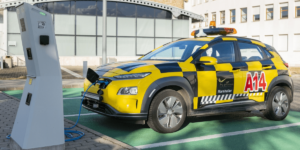 The airport company says that of the 176 charging points for its own fleet, 134 will be subsidised by the EU while the remaining points will be financed entirely from the airport’s own funds. Electromobility is one of the six pillars of the airport’s sustainability strategy, which is why the company has been “focusing on the development of an electric charging network inside and outside the airport fence” for years.

The current announcement, however, is primarily about the charging points inside the fence. Passengers cannot benefit from the 176 charging points – or only indirectly, in that the airport uses electric vehicles. On the “landside”, as the operator calls it, 19 charging points are available in the freely accessible part.

Recently, 76 ground handling vehicles and ten fleet and management vehicles were converted from conventional to electric or hybrid models. 30 per cent of the fleet of taxi partner Főtaxi already consists of electric cars. At the Főtaxi airport car park there are six ultra-fast charging points so far, the number of which is to increase to 26 by the end of 2025.

Last year, the operating company set out to achieve net-zero emissions operations as early as 2035 instead of 2050 as previously planned. According to its own figures, Budapest Airport was one of a small group of only 58 airports worldwide in 2021, out of only 58 airports that have achieved Level 3+ of the Airport Carbon Accreditation Scheme – which means balance-neutral CO2 operations via offsets. The point about emissions from ground vehicles is common among airports, while the main producer of emissions are of course the aeroplanes themselves.