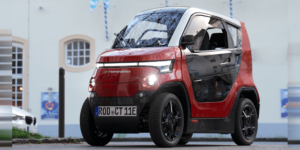 The closing of a Series A funding round paves the way for Israeli startup City Transformer to start series production of the CT-1, an electric microcar that can change its vehicle width at the touch of a button.

With the 10 million US dollars from the current financing round, City Transformer plans to tackle its plans for series production of the CT-1 without delay and prepare the market launch on schedule for 2024.

Founded in 2014, the Israeli start-up presented its size-changeable ‘Urban EV‘ to the general public for the first time last year at the IAA Mobility in Munich and gave the most important data. The City Transformer is a light electric vehicle of the L7e class for up to two people that can change its width while driving – from 1.40 to one metre or vice versa. The City Transformer also has a length of 2.5 metres and a height of 1.58 metres.

The CT-1 is powered by two electric motors with 7.5 kW each. The top speed is 90 km/h. With the battery, whose energy content is not mentioned, 120 to 180 km should be possible. If the chemical storage is empty, it can be recharged from 0 to 80 percent within 30 minutes.

As of now, the City Transformer CT-1 can be reserved by private individuals for a fee of 150 euros. However, the start-up informs that only a limited number can be pre-ordered. No wonder, the purchase price is thus reduced from the regular 16,000 euros to 12,500 euros for pre-orderers.

The financing round was led by the Lubinski Group, an Israeli car importer with 160 service and repair workshops in Germany as well as sales outlets in France and Eastern Europe. Other investors included private individuals and multinationals from the transport and real estate sectors, it said. However, no names were mentioned.

Audi launches pre-sales of the Q4 e-tron in China