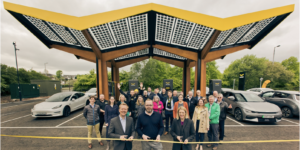 Fastned has opened its first ultra-rapid EV charging location in London. Based in the London Borough of Greenwich the station provides six bays with a total of 300kW of renewable energy.

The launch is Fastned’s 11th in the UK and its first in London, coming just weeks after Fastned opened the biggest ultra-rapid charging station in Scotland.

The new station is located just off Woolwich Road (A206) near the Blackwall Tunnel and features a highly visible solar canopy that helps EV drivers to locate the site and stay dry while charging.

Fastned says that the new station helps relieve the need for more rapid hubs in London, as set out in the Mayor of London’s “2030 EV Infrastructure Strategy.” The station should support London’s plans to become a net-zero city by 2030.

Tom Hurst, UK Country Manager for Fastned said: “We’ve developed significant expertise in providing ultra-rapid charging across Europe and in the North East of England, so we’re excited to bring this experience to the capital. London’s target of hitting net-zero by 2030 is ambitious, and we’re delighted to play a part in supporting the capital as it transitions.”