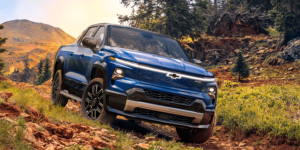 Democrats in the US Senate have abandoned their plan to increase the tax credit for electric vehicles assembled by union workers in the US to up to $12,500.

This means that the previous tax credit of up to $7,500 will remain for these electric vehicles. The measure as part of the ‘Build Back Better’ plan had been criticised from the beginning for being a protectionist electric car tax credit: the ambassadors of countries with strong car industries such as Germany, Japan and South Korea had written a letter of complaint to the top leaders of the US Congress.

A critic of the plan was also the Democratic Senator for West Virginia, Joe Manchin. Manchin had called the higher tax credit “ridiculous” in view of the long delivery times for electric cars – a product was being subsidised for which there was a waiting list. In addition, the senator criticised that due to the subsidy cap, vehicles from some US manufacturers will soon no longer be eligible for subsidies – whereas vehicles from foreign manufacturers will be. “Any foreign vehicle that is an electric vehicle is going to be able to claim a $7,500 credit,” Manchin said. “I don’t think that’s our intent.”

Meanwhile, talks continue about lifting the current cap of 200,000 plug-in vehicles per manufacturer that qualify for the tax credit. For General Motors and Tesla, that limit has long been exceeded. The CEOs of General Motors, Ford, Stellantis and Toyota Motor North America had written a joint letter a few days ago in favour of lifting this cap.

Tesla CEO Elon Musk, on the other hand, argues for the complete abolition of the electric car subsidy. “Tesla is successful currently in spite of our competitors having materially greater tax advantages than Tesla — in spite of it, not because of it,” he said in a recent interview. “If you eliminated all EV incentives tomorrow, Tesla’s competitive position would improve significantly. I’ll say that again, if you eliminated all…EV tax credits, Tesla’s position would improve immediately.”

The 200,000-vehicle cap rule dates back to 2009. When a manufacturer reaches that limit, the tax credit is reduced by 50 per cent (i.e. to $3,750) for vehicles sold in the next six months. For another six months, the tax credit is halved again to $1,875 before it automatically expires one year after the cap is reached.

The US Senate will move forward with the $1.9 trillion ‘Build back Better’ bill, which has been stuck in the Senate for a year due to opposition by senator Joe Manchin. Following Manchin’s change of heart, Tesla and GM are now to be included again, by eliminating the 200,000 vehicle cap. The bill, titled “Inflation Reduction Act of 2022”, will maintain the $7,500 EV tax credit, which now will be implemented at the point of sale, rather than the tax bill.

There is additional small print now too: in order to qualify for the full credit, the vehicle needs to be assembled in North America, as well as have the majority of battery components coming from the US, and finally, contain a certain percentage of minerals from countries with free trade agreements with the US.

A new provision was also included for used EVs: now the purchase of a used electric vehicle will be supported with a federal tax credit of $4,000.

There are also now financial limits imposed on the credits: “Zero-emission vans, SUVs, and trucks with MSRPs up to $80,000 qualify for the credit, while electric sedans can only be priced up to $55,000 MSRP to qualify. The full EV tax credit is now also to be limited to individuals reporting adjusted gross incomes of $150,000 or less, or $300,000 for joint filers.