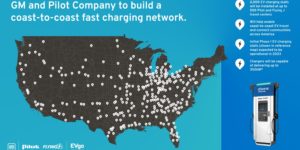 General Motors has announced the development of a fast charging network at Pilot Company car stations in the US. It will include 2,000 stations with charging capacities of up to 350 kW at up to 500 locations across the country and will be installed, operated and maintained by GM partner EVgo.

Installations will begin immediately, according to the US car giant. According to the statement, the first stations are expected to be operational in early 2023 and the build-out completed in 2025. Although the HPC stations will be operated by EVgo in its “eXtend” offering, there is to be co-branding with the “Pilot Flying J” and ” Ultium Charge 360″ brands. The latter is General Motors’ charging offering.

The Pilot Company is a petroleum company based in Knoxville, Tennessee. Its subsidiary Pilot Flying J operates a number of truck stops in the USA and Canada and refers to its own rest stops as “travel centres”. The fast chargers will be located at these sites along major highways to enable coast-to-coast electric travel.

The GM release says many of the sites will have canopies “to protect customers from the elements while charging.” It is not clear from the information whether this will be a stand-alone structure for the charging stations or whether the chargers will be built under the existing petrol station roof. Some of the stations will also be built on the drive-through principle to allow vehicles with trailers to charge conveniently.

GM and EVgo previously announced in 2020 that they would build 2,700 fast-charging stations in the US by 2025, and later increased that goal to 3,250 fast-chargers. “We are committed to an all-electric, zero-emissions future, and ensuring that the right charging infrastructure is in place is a key piece of the puzzle,” said GM CEO Mary Barra. “With travel centers across North America, Pilot Company is an ideal collaborator to reach a broad audience of EV drivers.”

“Our travel centers are well-equipped to accommodate EV charging with 24/7 amenities and convenient proximity to major roadways across the country,” says Pilot CEO Shameek Konar, adding, in light of the government’s announced electric mobility incentives, “We look forward to collaborating with GM and the U.S. Department of Transportation to make convenient coast-to-coast EV travel a reality through our national network of travel centers.”