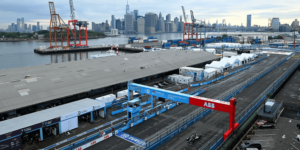 Nick Cassidy (Envision Racing) won his first Formula E race over the weekend. In the second race on Sunday, former champion Antonio Felix da Costa won in the DS Techeetah. The double-header in New York also saw a change at the top of the drivers’ standings.

For Cassidy it was the first race win in Formula E, it was his 26th race in the electric series. However, the eleventh race of the season on Saturday did not go the full race distance of 45 minutes and one lap: A few minutes before the end, heavy rain suddenly set in – due to the poor track and visibility conditions, the race organizers decided to slow down the race for the time being with a so-called “Full Course Yellow”. This involves a kind of speed limit and a strict ban on overtaking.

But: When the group of leaders tried to brake into a corner right at the beginning of the “Full Course Yellow”, standing water on the track caused aquaplaning – several vehicles (including Cassidy) subsequently crashed into the track barrier, and there were also several collisions in the rear field. Therefore, the race was stopped immediately and not restarted.

According to the regulations, it is not the result at the time of the abandonment that is taken into account, but the result of the last lap before the abandonment. At that point Cassidy was leading ahead of Lucas di Grassi in the ROKiT Venturi and Robin Frijns in the second Envision Virgin – so there were two customer Audis and one customer Mercedes on the podium.

Important for the championship fight: Mercedes driver Stoffel Vandoorne, who was also involved in the accident in turn 6, was classified as fourth. Championship leader Edoardo Mortara was initially classified as fifth – but because he drove faster than permitted during the “Full Course Yellow” phase shortly before the stop, Mortara (as well as Jake Dennis and Mitch Evans) received a five-second time penalty. This dropped Mortara down to 9th place, which is why Vandoorne was able to catch up in the drivers’ standings.

On Sunday, Antonio Felix da Costa (DS Techeetah) won ahead of Stoffel Vandoorne (Mercedes EQ) and Mitch Evans (Jaguar). It was the first win of the season for former champion da Costa and the DS team, which had long been used to success.

In the race, which was completely dry this time, da Costa was able to take the lead from the first grid position. Alexander Sims in the Mahindra was able to stay in the lead for a long time, but dropped back towards the end of the race. In the duel with Sims, Jaguar driver Evans made a small driving mistake, but was later able to work his way past the Briton again and thus celebrate another podium finish.

At the front, Mercedes driver Vandoorne was unable to mount a successful attack against da Costa. But the Belgian driver should be able to live with second place: Since championship rival Mortara came away completely empty-handed in Sunday’s race, Vandoorne took the championship lead with four races to go. With 155 points he is ahead of Mortara (144), Evans (139) and Jean-Eric Vergne in the second DS Techeetah with 128 points – in New York Vergne could not score in both races. Robin Frijns (104 points) and Sunday’s winner da Costa (100 points) still have mathematical chances for the championship.

In the team standings, the Mercedes works team regained the lead with 238 points thanks to Vandoorne’s podium and a black Sunday for their own customer team ROKiT Venturi. Venturi and DS Techeetah are tied behind with 228 points.