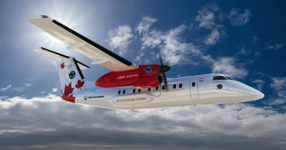 The goal is to achieve a 30% improvement in fuel efficient and commensurate reduction in carbon dioxide emissions, compared to today’s most advanced turboprop engines for regional aircraft. The project is part of Pratt & Whitney Canada’s regional hybrid-electric flight demonstrator programme.

Ricardo says the Pratt & Whitney Canada Regional Hybrid-Electric Flight Demonstrator is based on a De Havilland Canada Dash 8 experimental aircraft. Adrian Schaffer, President of Emerging Mobility at Ricardo, said that the deal “represents a significant milestone for our business, as we look to expand our capabilities and footprint in North America and explore new opportunities supporting the decarbonisation of the global aerospace sector.”

Jean Thomassin, Executive Director new products and services, Pratt & Whitney Canada said: “Our collaboration with Ricardo brings valuable expertise around component design, system integration, and testing, which will ultimately enable us to demonstrate the potential of this technology, with ground testing starting later this year and eventual flight tests in 2024.”