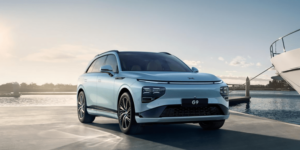 Xpeng is now accepting reservations for its fourth model, the G9, in its home country. In connection with the pre-sales launch in China, Xpeng also gives more technical details of the model, which was also designed for international markets from the very beginning.

The G9 – or more precisely, only the exterior – was shown for the first time in November 2021. Apart from the body design, there was only rudimentary information about the vehicle at the time. The G9 uses the manufacturer’s recently announced 800-volt electric car platform with silicon carbide technology. Basically, the system, which the company calls ‘XPower 3.0’, is designed for very high charging powers of up to 480 kW (600 amps at 800 volts). This is supposed to be able to recharge power for up to 200 kilometres in just five minutes.

At the start of pre-orders, there is now more, but still not all, information. The range in the Chinese CLTC standard test is said to be up to 702 kilometres – as a rule, the CTLC enables higher standard ranges than the WLTP, which is common in Europe. Xpeng repeats the statement of the 480 kW charging power of the 800-volt system. However, there are no more precise details on the battery and the drive system yet.

Since Xpeng sees its vehicles more as networked devices that can also drive, the focus is on other technical data. The model’s intelligent driving system uses two Nvidia DRIVE Orin chips with a total computing power of 508 TOPS. The computers evaluate the data from a total of 31 sensor units.

As mentioned, the view into the interior is also new. There, Xpeng departs from the previous concept of its flagship sedan P7 with a portrait touchscreen in the centre console. In the G9, two touchscreens are installed transversely – one in the centre and one for the front passenger. Each of the screens is 14.96 inches – comparable dimensions to the screen in the Tesla Model 3/Y, just two units side by side. There is also a smaller cockpit display for the driver. The Xpeng G9 is equipped with the Qualcomm 8155 chip as standard.

Interested parties can reserve the G9 now for around 2,000 yuan (about 290 euros). If this reservation later becomes a binding order, the company will grant a discount of 5,000 yuan, or about 720 euros. The only thing is that Xpeng has not yet mentioned the specific vehicle prices for a binding order. But that has not slowed down interest: according to the company, 22,819 reservations for the G9 were received in the first 24 hours.

While the prices have not been officially announced, there is a price indication, however: founder and CEO He Xiaopeng had previously stated in an interview that he was confident that the G9 would be the “best SUV below 500,000 yuan”. That is the equivalent of 71,830 euros. It is not yet known when the G9, designed for international markets, will be available for order outside China.

MG Motor opens for pre-orders of the MG4