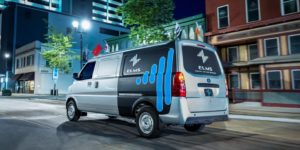 US electric car start-up Mullen continues on the path of acquisitions. After taking the majority stake in Bollinger Motors this summer, the company is now looking into taking over Electric Last Mile Solutions (ELMS).

ELMS had filed for bankruptcy in June. The company wanted to import electric delivery vehicles from China, assemble them at a former GM plant in Mishawaka, Indiana, and then distribute them in the US. In early 2022, less than a year after it went public through a $1.4 billion SPAC deal, the company filed for bankruptcy, following accusations that the two founders made “inappropriate stock purchases”. Shortly after the allegations became known, the auditor BDO also quit. With no more annual reports published without the auditor, insolvency followed.

It is now revealed that Mullen is so far the leading bidder for ELMS at $92 million and would pay $55 million for the company’s assets as well as assuming its liabilities of $37 million. The auction is scheduled to take place on 7 October.

But, as Techcrunch writes, Mullen faces problems at home: Since the company still hasn’t launched a vehicle since its SPAC IPO in 2021, and short-seller Hindenburg Research had also raised serious allegations, the share price has been falling steadily. Earlier this month, Nasdaq warned that the company could be delisted because the share price had been less than a dollar for 30 days in a row. Shortly after the Nasdaq warning, Mullen then announced the acquisition of Bollinger.