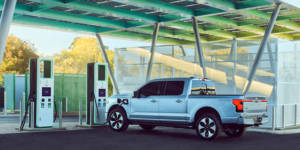 According to an agency report, the US Environmental Protection Agency (EPA) plans to include electric cars in the Renewable Fuel Standard (RFS), which regulates the blending of renewable fuels. This could benefit large electric car manufacturers such as Tesla.

The RFS ensures that refiners are required to blend a certain quota of biofuels into the fuel pool themselves or buy tradable credits called RINs from companies that add biofuels to the pool.

Several insiders have now reportedly confirmed to Reuters news agency that the EPA wants to expand the RFS program to include electric cars. This would mean that ‘electric RINs’, or e-RINs, could also be used to offset fossil fuel feed-in. It would bring new revenue to the sellers of the e-RINs. According to the report, electric vehicles would “likely qualify for credits under the program’s ‘D3’ mandate pool, which includes cellulosic biofuels.”

Reuters had previously reported that the Biden administration was said to have met with Tesla to collaborate on the design of an e-RIN program. As an electric-only car manufacturer, Tesla would be one of the beneficiaries of the new rule if it comes as Reuters described.

The EPA would not comment on the information when asked by Reuters. EPA spokesman Tim Carroll indicated only that the agency intends to meet deadlines for implementing the RFS program. EPA has until Nov. 16 to propose the exact rules for 2023. However, EPA is expected to submit its proposals to the White House for approval as early as next week.