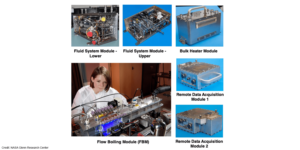 A cooling technology developed by NASA for use in space could significantly speed up the charging of electric cars on Earth in the future. As NASA explains in a blog post, the cooling mechanism developed as part of the Flow Boiling and Condensation Experiment (FBCE) has the potential to reduce the charging time for electric car batteries to well under five minutes.

This would require a current of 1,400 amps, but this would currently overheat the cables. In an experiment, the researchers have now applied FBCE technology to charging technology for electric cars by passing a dielectric liquid coolant through the charging cable. According to NASA, a current of 2,400 amps could be achieved in the process.

Basically, the technology was developed because NASA needs to have precise “thermal control” on some components for future moon and Mars missions. What the engineers mean: The sometimes extreme temperature differences between day and night in space must be compensated for so that technology and humans can survive under these conditions. Since these cooling components have to be as compact and light as possible, they could also be used for other applications on Earth – fast charging, for example.

Bird to withdraw from some markets due to supply issues