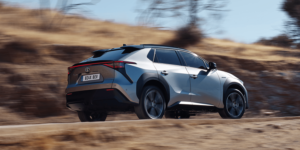 Toyota is reportedly considering a massive increase in production of its BEV model bZ4X and its offshoot Subaru Solterra. According to an agency report, their production of currently just over 1,000 cars per month could be increased by six or even twelve times – but not immediately.

This is what Reuters claims to have learned from insiders, but it also provides two important pieces of additional information: Even if Toyota makes the decision, production will not be increased that much until 2025. And even that is only on the condition that Toyota can procure the necessary components such as semiconductors.

The bZ4X is currently produced together with gasoline and hybrid cars at Toyota’s Motomachi plant. But the potential additional capacity would come from another plant, the Takaoka factory. The window of just over two years that Toyota is targeting, according to the Reuters report, is well within the industry standard lead time for suppliers. They, too, have to scale the production of their supplier parts and – especially in the case of a six- or twelve-fold increase – possibly also expand them. A decision on the part of Toyota would therefore have to be made promptly.

However, Toyota did not want to comment on the information when asked by Reuters.

The decision is likely to be influenced by a completely different process, which has apparently been initiated in parallel: Toyota has initiated a review of its electric car strategy, as recently reported, with the aim of lowering production costs to better stand up to Tesla and other competitors.

One of the key points of the working group called ‘Business Revolution’ is said to be a re-evaluation of the platform strategy in this cost-cutting effort. The e-TNGA platform – on which the bZ4X is also based – played an important role in the 15 concept electric cars that Toyota presented as recently as December 2021 as part of its electric strategy at the time. Now it is to be examined whether the new cost targets can be achieved with a revision of the e-TNGA or whether a new platform has to be developed – both of which would probably take several years.

According to one of the Reuters informants, the ramp-up of bZ4X production is to be able to offer enough electric cars while the review is underway. On the other hand, it would also mean that Toyota is scaling up production of a model that potentially has too high production costs.

Kia announces US prices for the 2023 Niro EV