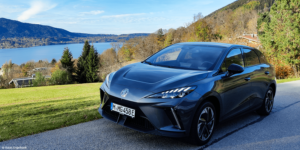 We took the MG4 Electric for a ride around Munich on a day much too warm for November, with 17 degrees. The MG platform is inspired by Volkswagen’s modular electric vehicle (MEB) architecture known from the ID.3 but is significantly cheaper. So how technically solid is this potential bang for the buck?

When tested on the winding country roads around Lake Tegern, the MG4 Electric is a lot of fun to drive. 150 kW on the rear axle offers solid performance and is more than sufficient for this size class. At traffic stops, the electric MG4 leaves most combustion engines behind, and the small turning circle makes manoeuvres effortless, especially in city traffic. On the ‘Autobahn’, too, it sits nicely on the road, doesn’t show any nervousness and accelerates briskly up to 130 km/h and beyond that up to the sealed-off 160 km/h, a tad more leisurely but still snappier than, for example, competitors from Stellantis.

The steering is buttery smooth, as is popular in the Chinese market; MG Motor is owned by SAIC. Still, it certainly takes some getting used to being able to almost continuously steer with two fingers – while pleasant when parking, it is a bit too numb for European tastes on the highway. However, the steering is not spongy; it converts every movement precisely, with very little resistance. Sporty drivers might find this too easy, but this ease is probably more comfortable for everyday use.

In any case, the seats are certainly not made for very dynamic driving and lack lateral and lumbar support. Nevertheless, the rear seat is very comfortable and feels a tiny bit better than in the VW ID.3, thanks to good thigh support (which will still be missing in many other 2022 BEVs) and plenty of legroom; it only lacks a centre armrest.

The 363-litre (or 1,177-litre) trunk in the MG4 is surprisingly large for the car’s exterior dimensions (4287 mm long, 1836 mm wide, 1504 mm high). The double bottom hides not only a tire repair kit but also clever cable pockets that are secured with Velcro.

Consumption and charging: Quite suitable for long distances

The larger battery is rated at 130 kW DC charging power, but during our test, the charging station’s display actually showed 145 kW. The car’s system holds this peak power for a comparatively long time, so 28 minutes were sufficient for a 10-80% charge, which certainly qualifies the MG4 EV for longer journeys. Another clever feature is the battery heater, which, in contrast to various competitors, can be activated manually by drivers.

Of course, consumption values are always to be taken with a grain of salt on one-day driving events such as those we attended, but they still offer some initial orientation. In our case, the MG4 was at 16.9 kWh/100 km at the end of the day in a very mixed driving profile: full power on the highway (according to the spec sheet, the MG4 is locked at 160 km/h, the speedometer showed a peak of 172 km/h), more standing than driving in Munich’s city traffic and lots of cornering fun on the country roads around Lake Tegernsee. With the battery’s 62 kWh net energy content, the consumption results in a real range of just over 360 kilometres. In the UK, MG specifies 281 miles for the MG 4 Electric.

For long-distance journeys, however, the assistance systems are rather a hindrance, which during the test proved to be a real downer in an otherwise quite good vehicle. As in the ZS EV tested by electrive, the adaptive cruise control functions so jerkily that it makes passengers nod their heads every time the speed is adjusted, much like when the clutch is depressed in a classic combustion car. The lane assist and change system does many things but keeping the lane. Very nervously, the MG4 swings from the left to the right edge of the lane, resembling a hare trying to hook the fox. Its Wolfsburg counterpart does this much better. On a positive note, however, the 360-degree camera is very helpful when parking and is by no means provided to every vehicle in this price range.

Infotainment: A lot in it, but one essential function

The infotainment system offers all the usual features, has solid voice control (with room for improvement, but it handles the most important basic functions well) and a sound navigation system. Unfortunately, it lacks a route planner, so you still have to find charging stops yourself, which may also explain why battery heating can be activated manually. A database of charging stations is available, but anything over 50 kW is considered “super-fast”, and the operator filter only knows six providers, so you will probably have to use a third-party app. However, this is no problem thanks to Apple Carplay and Android Auto (both only wired and not wireless).

The steering wheel controls, which allow direct access to the climate functions and media and cruise control without having to take your hands off the steering wheel, were mainly well-thought-out. The display in the cockpit still allows for one or two typing errors, but this can also be found in vehicles twice as expensive (greetings to Polestar) and can be ironed out comparatively quickly with a software update.

Those who like to stream music can also do so via Carplay/Android Auto or use the natively integrated Amazon Music. During the sound test, it is noticeable that a loud bass makes the driver’s door panel shake. When driving over cobblestones, a clear vibration of the dashboard is also evident. In general, the MG4 is not perfect in terms of quality – but no one expects that in this price range. However, it is of a higher quality than most Stellantis models of the same price.

Direct comparison with the ID.3

Talk about comparisons – Volkswagen and MG’s Chinese parent company SAIC have been working together for over 30 years, not only the MG4 as a single model, but the entire platform takes a lot of inspiration from the MEB, so we will compare the two vehicles directly. Dimensions, battery sizes and the interior are very similar. Both cars use a lot of hard plastic, but the ID.3 looks a bit more premium than China’s competition. However, both vehicles would benefit from a more sparing use of glossy plastic.

Furthermore, the VW model stands out from the MG4 with a functioning charge planner, really good assistance systems and a great head-up display. On the other hand, the touch buttons on the steering wheel of the ID.3 are clearly inferior to the physical switches in the MG4 and the ID.3 scores with dedicated temperature controls and a gear selector button directly on the steering column. The round gear selector knob in the centre console of the MG4 not only takes up an unnecessary amount of space but is also more reminiscent of the rotary entertainment controls from BMW and Mercedes – the temptation to change the radio station with the gear shift is correspondingly great.

What both vehicles have in common is the good amount of space in the rear, the excellent turning circle, the lack of a front luggage compartment and relatively low fuel consumption figures. The powertrain in both vehicles also produces 150 kW and accelerates the car from 0 to 100 km/h within the same time (7.7 seconds for the MG4, 7.3 to 7.9 seconds for the ID.3).
If you drive a lot of long distances, you are probably better off with the VW model at the moment; the charge planner and assistance systems are more sophisticated. The availability of a 77 kWh battery – MG’s (still) 64 kWh is the end of the line – also makes a choice easy for those who like fewer charging stops.

In a market environment where prices and delivery times know only one direction (upwards), the MG4 is a pleasant antithesis. Its main appeal lies in the fact that it shares almost all the virtues of the Volkswagen ID.3 but is at least 2,000 euros cheaper. Even if some details still need to be improved, especially the assistance systems, the MG4 is an attractive overall package in size and price class.

However, we will have to find out in a more extended test how the range develops in winter and how good the charging performance is in everyday use at lower temperatures. As long as the current environmental bonus subsidies are still available in Germany, it is available with the smaller 51 kWh battery from €22,420 incl. VAT. In the UK, the MG 4 Electric prices start from £25,995.