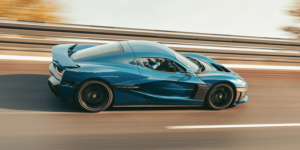 The all-electric hypercar Rimac Nevera has reached a top speed of 412 km/h. According to Rimac, this makes it the fastest electric production car in the world.

“To travel at 412kph, or 258mph, means travelling at a third of the speed of sound. Simply achieving that alone in a road car is incredibly complex, but in Nevera we have created a car that can travel long distances on a single charge, can tackle tight and twisting race tracks and can drift as well as break straight-line speed records, both for acceleration and V-MAX,” said Miro Zrnčević, Rimac’s Chief Test and Development Driver.

Apparently finding the track to perform the feat on was not an easy task, as the ” team looked specifically for an oval with straights long enough to achieve the Nevera’s top speed, eventually settling on the Automotive Testing Papenburg track in Germany, with two 4km straights”.

Production for the Nevera kicked off in July, with the announcement of a battery improvement following shortly afterwards. And while Hyundai had cut their ties before the production start in May, Porsche filled the gap in June.

Bird may come crashing down