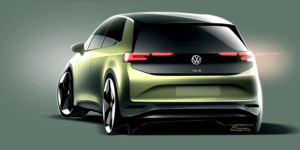 Volkswagen is investing around 460 million euros in the transformation of its main plant in Wolfsburg as a first step until the beginning of 2025. The investments will mainly go towards preparations for the recently confirmed production of the new ID.3 – but also a possible ID.3 X compact SUV.

The compact electric car will roll off the production line in Wolfsburg from 2023 onwards. Initially, in partial production with parts from Zwickau, while full production is planned at the plant from 2024 onwards. VW has just confirmed the schedule of the ramp-up, which is to be completed by the end of 2025.

The Wolfsburg plant has been manufacturing combustion models such as the Golf and Tiguan, both based on the MQB. Although these models are already offered as plug-in hybrids – meaning that a certain amount of high-voltage know-how is available – the plant still needs to be retooled for the all-electric MEB platform.

Volkswagen says that qualification measures for the workforce are now also being prepared. “With these strong decisions and investments, we want to further strengthen the competitiveness of the plant and offer the workforce a concrete long-term perspective,” said VW brand boss Thomas Schäfer. Looking ahead to the current year, Schäfer thanked the employees for their “high level of flexibility and cohesion in a very challenging economic environment”.

Following the ramp-up of production of the ID.3, an additional all-electric MEB model in the SUV segment is to “sustainably increase” the production of EVs in Wolfsburg. Such a vehicle has most recently been called the ID.3 X, but is to be visually distinct from the familiar ID.3. There are no details yet, although the MEB will probably set the parameters for the vehicle’s drive systems and charging capabilities.

This may well come with changes since  Schäfer is explicitly talking about an upcoming platform being referred to as MEB+. “The MEB still has a lot of potential. Our goal is to take the platform to the next level,” says the brand boss. “To achieve this, we are investing substantially in upgrading it. With the MEB+, we will then be in an excellent position for the years to come.”

The German carmaking giant says that the MEB+ should enable higher charging speeds and greater ranges without mentioning specific targets in this regard. VW has now also confirmed that the “highly standardised unit cell from the group’s own cell factory in Salzgitter” will also be integrated into the MEB+, which, until now, has only been rumoured. This means that the MEB will have a longer service life than planned. This statement from VW indicates that the MEB+ will not come before 2025 – because that is when production of the unit cell is scheduled to start in Salzgitter.

What is still undecided is whether the new model will be an SUV. “The ID.3 start-up is a first important step towards the electrification of our main plant. At the same time, we are working closely with the works council to bring another electric model based on the MEB+ to Wolfsburg – this will be a high-volume model in the booming SUV segment,” says Schäfer. “This is the world’s largest vehicle segment, which is also home to our popular Tiguan. The new model can be an excellent complement to our best-selling ID.4 and ID.5.” This perspective on the SUV segment suggests Volkswagen is expecting energy prices to go down and grids to be sufficiently fortified for the mass use of large electric vehicles for personal use in the ensuing period.

Works council chairwoman Daniela Cavallo said the exact schedule would be designed together. “Wolfsburg stands for the future. And the Works Council has a clear ambition for the Wolfsburg site: state-of-the-art production, the best workforce, and the biggest pioneering spirit. That means Wolfsburg will remain the brand’s – and the Group’s – powerhouse in the coming years with the transformation to electric production, an additional all-electric model by 2026, along with Trinity and the SSP. We will develop the detailed timetable together. That is how we are creating secure jobs. I would also like to thank the entire production team at our main factory that has weathered many a crisis in this difficult year.”

VW to boost range and charging performance for the MEB+