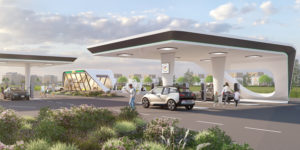 The EU Commission has given the German government permission to subsidise the construction of 8,500 fast charging points with a sum of 1.8 billion euros. The measure envisages charging stations every 15 to 30 driving minutes.

The Deutschlandnetz was first proposed by the German government in August 2021, and is to involve the installation of charging stations at approximately 900 locations in Germany. The focus will be put on those areas that do not have high power charging (HPC) points or where the existing points are insufficient to address anticipated demand.

The approval that has now been granted by the Commission is another important step after the conclusion of what is called a “state aid review” and the green light from Brussels. In August this year, some charging point operators (CPO) filed complaints against the proposed Deutschlandnetz with the EU Commission’s Directorate-General for Competition. With the approval now granted, the Commission has deemed that the scheme is “necessary and appropriate to promote the development of fast charging infrastructure on a large scale,” as was intended when the German government proposed the Deutschlandnetz.

The Commission says, “Germany put in place sufficient safeguards to ensure that the scheme has a limited impact on competition and trade within the EU.” Finding that: “The scheme is open to all companies operating in the sector and the beneficiaries will be selected following an open, transparent and non-discriminatory bidding process. In addition, the German authorities will ensure that the prices charged are in line with those charged by comparable existing infrastructure.”

The Deutschlandnetz was initiated under the previous Federal Minister of Transport Andreas Scheuer (CSU) and is now being continued by his successor Volker Wissing (FDP). Under this scheme, the federal government does not promote individual charging stations or parks but rather invites tenders for charging parks to meet its requirements, and in return, the federal government contributes to the construction and operating costs for eight years.

One of the conditions is that there is an as-yet-undetermined price cap for ad-hoc charging. This is supposed to be a “breathing cap” in order to also be able to react to price and market conditions – and not the fixed price limit of 0.44€/kWh that was mentioned in earlier reports.

The Commission says that direct grants and recurrent payments (intended to cover part of the operating costs), are to have an “incentive effect”, “as the beneficiaries would not make the relevant investments without the public support”.

The Commission’s approval under state aid law clears another important hurdle for the Deutschlandnetz. Exactly which companies are to be supported will be determined by two tenders. The tender for the regional lots started in October 2021, and the tender for the motorway lots was launched in December 2021.