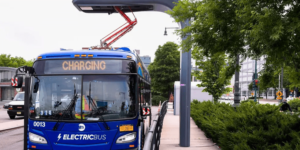 New York Governor Kathy Hochul is progressing with her EV policies once more as she announces $23 million in funding for e-mobility initiatives in New York State. These include $15 mn for charging initiatives and another $8 mn for electric school and transit buses.

New York State reportedly has a goal of a zero-emission electricity sector by 2040, including 70 per cent renewable energy generation by 2030, and to reach economy-wide carbon neutrality. Its Climate Leadership and Community Protection Act aims to reduce carbon emissions by 85 per cent by 2050 and at least 35 per cent by, with a goal of 40 per cent of the benefits of clean energy investments being directed to disadvantaged communities.

As for today’s announcement, the $23 mn in funding includes three schemes. Hochul has made $8 million available under the third round of the Direct Current Fast Charger program to install electric vehicle infrastructure in Buffalo, Rochester, and Syracuse; $7 million went to ChargePoint and EVGateway to improve access in upstate New York under Rounds One and Two of the Direct Current Fast Charger program; and the remaining $8 million were made available for electric school buses and paratransit buses under the New York Truck Voucher Incentive Program.

New York has been building a reputation for e-mobility. Hochul, for example, prolonged the EV Make-Ready scheme launched by her predecessor Andrew Cuomo in 2020. The programme banks on public-private partnerships with utilities and charging equipment manufacturers expected to help install 50,000 AC and 1,500 DC charging stations in the US state by 2025 through a cost-sharing programme.

For this latest charge announced this week, the New York State Energy Research and Development Authority (NYSERDA) seeks proposals from electric vehicle (EV) developers and installers to apply to the Direct Current Fast Charger (DCFC) program. Applicants must have at least two years of experience and ten fast or 200 Level 2 chargers. NYSERDA will consider proposals to develop two or more fast-charging sites, with at least half of all stations located in underserved areas. Each site must be able to charge at least four vehicles and have a total site capacity of 600 kilowatts or more. Additionally, each site must be within 12 miles of Buffalo, Rochester, or Syracuse city centres, and each proposal must have at least one location within the city limits.

NYSERDA will accept applications for round three of the program through 28 February 2023, and a scoring committee will evaluate all proposals based on the published criteria.