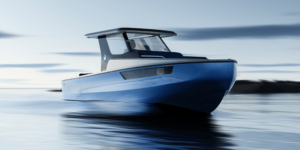 John Vo, the former Manufacturing Chief at Tesla, established a marine technologies company. Blue Innovations Group (BIG for short) will focus on manufacturing all-electric boats and equipment and is ready to show its first product.

Blue Innovations Group will be at the CES in Las Vegas in January 2023 to showcase its first product. The R30 is a 30ft (ten metres) all-electric power boat with 800 horsepower dual motors and solar charging. That is about all there is known so far regarding technology. Power boats, usually made for speeds, do not take all that easily to electrification, but the company also mentions a 220kWh battery pack.

Vo being a manufacturing specialist, has already found a production site in Pinellas Park in greater Tampa Bay, Florida. And he has big plans. Speaking to Electrek, Vo said, “To really impact the environment, you can’t build electric boats by the dozens. It has to be by the thousands”. To do so, he wants to utilise manufacturing technologies from the automotive field and, for example, exchange forego fibre in favour of aluminium. He also mentioned using a structurally integrated battery as part of the boat’s frame, clearly an idea first seen at Tesla, where he worked from 2011 to 2017.

As for the challenges of fitting a battery big enough for a fast boat, Vo wants to opt for lithium iron phosphate instead of traditional NMC or NCA chemistries. “So it’s a little bit bigger of a battery with slightly lower energy density,” he told Electrek. “I have the space – it’s a boat.”

BIG will demonstrate its hull, propulsion system and user interface at the upcoming Consumer Electronics Show (CES) from 5 – 8 January 2023 in Las Vegas, USA.

When you can expect a real-life launch remains to be seen. So far, the website only says “coming soon”.