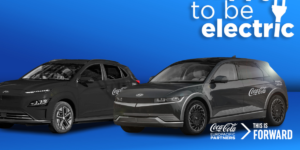 Coca-Cola Europacific Partners (CCEP) announces that it will ultimately convert its fleet of company cars in the Netherlands to electric vehicles by the end of 2026. The move follows similar advances CCEP just made in Belgium.

The logistics partner to Coca-Cola in the BeNeLux only in November last year had begun deploying Renault electric trucks for last-mile deliveries in Belgium, making it one of the country’s largest fleets of electric trucks. At the time, An Vermeulen, VP & Country Director of Coca-Cola for Belgium and Luxembourg, said: “Investing in electric trucks will allow Coca-Cola Europacific Partners to cut CO2 emissions by 30% across the entire value chain by 2030 and become climate neutral by 2040.”

Now the Netherlands and company cars seem to follow suit. As CCEP announced, it will switch to electric vehicles across its fleet of company cars by the end of 2026. This concerns 300 cars and is part of broader sustainability efforts.

CCEP has been a member of the global EV100 initiative since 2021. The EV100 members pledge to accelerate the transition to electric vehicles. Within this framework, CCEP has committed to converting all its cars and vans worldwide to electric or ultra-low-emission vehicles by 2030 when they are not viable. In addition, CCEP aims to become net zero by 2040 as part of its ‘This is Forward’ sustainability plan.

CCEP Netherlands has not disclosed which manufacturers it may work with for the new electric company cars.

In Belgium, Renault Trucks is working closely with the distributor and “carefully analysed Coca-Cola’s logistics data, produced realistic route simulations, and carried out tests under real conditions that looked at the energy consumption as well as driver comfort and safety,” as Siegfried Van Brabandt, Managing Director of Renault Trucks Belux explained at the time.

In the Netherlands, efforts so far see CCEP use bio-fuel in the third-party logistics fleet and electric forklift trucks at its Dongen manufacturing site.