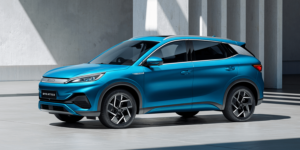 The first stores in the UK will be opening in the first quarter of 2023, with vehicle sales to follow shortly after. The first confirmed dealer partners include Pendragon, Arnold Clark Automobiles, Lookers Motor Group and LSH Auto Holdings.

The first BYD vehicle to be launched on the market in the UK will be the BYD Atto 3. Further UK dealer partners, product, and pricing information will be confirmed in the coming weeks

2022 represented another record year for BYD with global sales exceeding 1.8 million new energy vehicles. Next, the BYD brand is looking to break more records with another year of growth in 2023, facilitated by the launch across several European countries following success in the pilot market of Norway and expansion to Israel.

BYD has also previously announced which vehicles will follow the Atto 3 electric SUV, with plans to release the Tang and Han, although it remains unclear when these model options will follow. A month after announcing their electric vehicle trio, BYD announced plans to also offer its Seal electric sedan, which is to be offered over the course of 2023. There have been reports that BYD is also looking to sell the Dolphin compact EV in Europe, which would aim for a niche few vehicle manufacturers have been serving, however it remains unclear when or if this will occur.

“A vital principle of the BYD strategy is to work with the best partners. We have selected dealer groups with the expertise and geographic footprint to provide outstanding customer service,” said Michael Shu, General Manager and Managing Director of BYD Europe and International Cooperation Division, adding: “We will start building the network in territories where our partners are dominant and can best demonstrate and display our range of new models.”

In order to supply the demand for electric vehicles in Europe, BYD is looking to establish a passenger car factory on the continent, announced at the end of last year. BYD has big plans: In Germany alone, BYD wants to sell a six-figure number of electric cars in 2026.

Seres 5 to be available in Europe from March