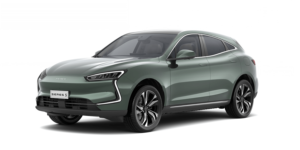 Seres, a brand belonging to the Chinese group Sokon, has announced the launch of its all-electric SUV model Seres 5 in Europe at the Brussels Motor Show. The Seres 5 will be available from March through the brand’s European distribution network.

Offered in China with hybrid powertrains as the Seres SF5, the mid-size SUV will be launched in Europe as a pure electric vehicle in three variants: standard 2WD, premium 4WD and flagship 4WD.

On board is an 80 kWh LFP battery as standard, which should provide a WLTP range of 500 kilometres for the standard 2WD version. Seres only states the vehicle’s power output for the top version: 430 kW with 960 Nm of torque. Seres gives the WLTP range of this 430 kW all-wheel drive version as 530 kilometres. A semi-solid-state battery with 90 kWh is installed here. Further details on this battery technology do not emerge from the manufacturer’s accompanying press release. Seres quotes starting prices of €63,900 for the basic version and €67,900 and €74,900 for the all-wheel-drive Premium and Flagship versions, respectively.

With dimensions of 4,710 x 1,930 x 1,620 mm and a wheelbase of 2,875 mm, the Seres 5 competes in the highly competitive national and international middle class. The manufacturer itself aims to position the model as a “sporty premium electric SUV”. This also explains the relatively high prices. However, with the above-mentioned range and an acceleration of the top model from 0 to 100 km/h in 3.7 seconds, the electric car does not have to hide either. The Chinese company has not yet given any information about the charging capacity. They only say that the model is “compatible with 95 per cent of the charging systems available in Europe” and has an interior plug with V2L and V2V functions.

Another interesting technical feature is that the chassis is mainly made of a lightweight aluminium alloy. At the front, the electric SUV has a double wishbone suspension with two ball joints and at the rear an independent suspension with trapezoidal links. The roofline is kept in a sweep and slopes down towards the boot, which is said to contribute to a drag coefficient of 0.278 Cd. As for the exterior, the Seres 5 will be available in eight exterior and five interior colours, which can be combined as desired.

Inside, three screens stand out in the cockpit: a head-up display, a central 15.6-inch control screen and a 12.3-inch LCD display. As an option, the manufacturer also offers a so-called deluxe 85-inch panoramic skyline, which is designed to expand the field of vision. As for the vehicle’s connectivity and IT features, Seres talks of 18 driving assistance functions, voice assistants and voice control, among others.

“In making SERES into a high-end, intelligent new energy vehicle brand, starting 2016, the group had consistently invested over 10% of its total revenue each year in Intelligent EV technologies,” emphasises John Zhang, chairman and founder of Seres Group. “We have built industry 4.0 standard Intelligent factories, have developed and launched high-performance battery and range of other intelligent EV related products. Today these technologies are not only leading the sector in China but are considered to be on an advanced level on a global scale.”

Seres was also present at the Paris Motor Show in 2022 with the Seres 5. At the time, the manufacturer also showed the Seres 3, a smaller SUV with a 53.7 kWh battery and a range of 329 km according to WLTP.

In China, Seres sells the electric SUV under the name Seres SF5 as a hybrid with two electric drives and a petrol engine as a range extender. The model was previously offered as a pure electric SUV by the US-Chinese manufacturer SF Motors with Huawei as the cooperation partner for the hybrid SF5. When it goes on sale in 2021, the vehicle will be the first electrified SUV.