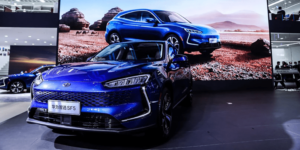 The model was previously offered as a fully-electric SUV by the US-Chinese manufacturer SF Motors. Under the direction of Huawei, the model now comes as a hybrid with two electric motors and a petrol engine as a range extender and is sold via the Chinese Huawei Store. And under a new name: The version with range extender is to be sold as ‘Seres Huawei Smart Selection SF5’.

The first Huawei car did not skimp on power. The adapted SF5 is to have a drive power of 405 kW and a maximum torque of 820 Nm. Acceleration from a standstill to 100 km/h is said to take 4.7 seconds. Both of these figures apply to the all-wheel-drive version; there is also supposed to be a front-wheel-drive version with only one electric motor, but Huawei does not provide any data on this in the press release.

The range in pure electric mode is given as 180 kilometres, with the support of the combustion engine it should be over 1,000 kilometres – but still given in the NEDC, which is still common in China. However, Huawei does not specify the battery size with which the 180 kilometres should be possible. There is also no information on the charging power. However, the vehicle is supposed to be able to charge other vehicles from its battery using the vehicle-to-vehicle function (V2V) and also supply other consumers with electricity using vehicle-to-load (V2L).

There are hardly any changes to the body, as the Seres Huawei Smart Selection SF5 is 4.70 metres long, 1.93 metres wide and 1.63 metres high. The wheelbase is 2.88 metres. Inside, there are comfort features such as heated and ventilated massage seats. The infotainment interface is Huawei’s HiCar, which is comparable to Apple CarPlay and Android Auto. In addition, linked smart home technology from Huawei can be controlled from the car.

The front-wheel-drive model costs at least 216,800 yuan in the Huawei store, the equivalent of around 28,000 euros. The all-wheel drive model is 30,000 yuan more expensive, so it costs at least 31,600 euros. The electric-only version is no longer offered. According to media sources, following Huawei’s entry, former Seres partners such as Bosch, Nvidia Samsung, Baidu and Alibaba are to have “largely said goodbye”.

A few days ago, Huawei had announced its intention to invest one billion US dollars in researching technologies for automated electric cars.