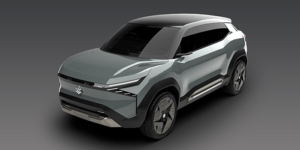 Suzuki presented the purely electric concept car eVX at the Auto Expo in India. The concept is to become a series model for the world market in 2025. It is a compact electric SUV that is supposed to have a considerable range despite its moderate battery size – but with a big catch.

With a length of 4.30 metres, a width of 1.80 metres and a height of 1.60 metres, the eVX is slightly larger than a VW ID.3, to use a model widely available in Europe for comparison. The eVX is four centimetres longer and taller than the ID.3 built in Zwickau.

Suzuki states an energy content of 60 kWh for the study – however, there is no information as to whether this is a gross or net value. As is well known, the ID.3 has 62 kWh gross and 58 kWh net – the larger battery with 82/77 kWh is also available as an option.

The eVX is said to have an unspecified all-wheel drive. For the premiere of the study, Suzuki states a range of 550 kilometres – however, according to the Indian MIDC standard. WLTP values are not known. Assuming that the all-wheel drive is not an exceptionally efficient system, the ID.3 can probably give a pretty good preview of a possible WLTP value: The ID.3 Pro Performance is given a combined WLTP range of 426 kilometres. According to the published pictures, however, the aerodynamics of the eVX are likely to be somewhat worse than those of the ID.3.

In terms of looks, the Suzuki eVX is clearly different from the VW: as the Japanese brand has an off-road tradition with the Jimny and other models, the electric SUV is designed in the style of a modern four-wheeler. The front and rear overhangs are short, the sills are designed to optimise the angle of slope. However, since there are no more precise statements about the chassis, the model’s off-road ambitions are unclear.

The rest of the body is kept relatively beefy. The steep front and long bonnet would theoretically not be necessary on an electric car, while the black plastic elements on the wheel arches and flanks give the eVX a decidedly robust appearance. Nevertheless, there are also modern design elements such as continuous rear lights and camera exterior mirrors. In addition, the two-tone paint is chosen to conceal the A and B pillars.