880-kW EV by Ariel: The British manufacturer has taken the wraps of its electric sports car at the Cenex Low Carbon event as planned. Codenamed P40, its most striking feature is a turbine range-extender. Production is scheduled for 2020, then with an actual chassis of course.
autocar.co.uk

Matrix Charging: To ease automatic charging, Austrian start-up easelink has developed a wireless conductive charging solution called Matrix Charging to debut at the IAA. It consists of a charge pad and connector that automatically connects to the pad. easelink says the conductive fast-charging happens at 43 kW (DC) and 22 kW (AC) and with 99 percent transfer efficiency.
easelink.com

Elektro Blitz: German start-up emobile-Transporter brings its first prototype of an electrified Opel (Vauxhall) van to the IAA. Based on the Opel Vivaro but renamed Elektro Blitz, it will hold three battery options, 43, 63 and 76 kWh, with a 100 kWh pack in the making. Diversity is also in the body as the young company follows Opel’s L2 line-up. Prices start from 62,225 euros.
elektroauto-news.net (in German)

Electric tractor concept: Indian manufacturer Escorts is working on an all-electric tractor as part of its New Escorts Tractor Series (NETS). While no details have been released, a serial version is allegedly due within the next 12 – 18 months and shall be offered in India as well as in other countries.
ndtv.com, moneycontrol.com, autocarpro.in 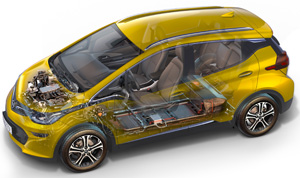 More than 400 km of range: Ahead of the official premiere in Paris, Opel published some new details about its upcoming Ampera-e. NEFZ puts range at over 400 km on one charge, which is more than any other EV in its class (the BMW i3 currently offers 300 km). The new Opel is said to arrive at dealerships in Germany in spring. The UK may have to wait for the second generation of the Ampera-e, as Opel subsidiary Vauxhall will not be offering the EV for now.
autonews.com, opel.com (details), fleetnews.co.uk (UK)

Chevy Bolt update: The Ampera-e’s big cousin has gotten its final EPA rating, according to which the Bolt can go 238 miles on one charge. Moreover, GM will offer over the air updates, just like Tesla, and released ten new videos ahead of the EV’s launch.
greencarcongress.com (range), insideevs.com (updates), insideevs.com (videos)

BMW i sales soar: The year isn’t over yet and BMW has already sold more electric cars than in all of 2015. A total of 16,855 BMW i rolled off the lots from January until the end of August, while the i3 sold 2,848 times in August alone – a 73 percent increase compared to the previous year.
bmwgroup.com

Australia pushes zero emission: According to Motoring, Australia is looking to scrap the Luxury Tax for (partially) electrified cars, as well as implement other incentives to push sales of electric and hybrid vehicles. What the measures will look like is still not clear.
motoring.com.au

No fees for EVs: As one of 14 incentives to push electric mobility, New Zealand extended the EV road user charge exemptions until 2021, meaning EV drivers safe up to 438 dollars. The government is also looking into whether electrically powered utility vehicles could benefit.
just-auto.com

Hybrid on track: Ariel has unveiled the Aero-P Atom Concept with hybrid powertrain. And while it is not said to directly influence a production car, it could mean that Ariel is looking eventually create a hybrid version on the Atom.
autocar.co.uk