SK Innovation has opened its battery cell factory in China, the construction of which the South Korean manufacturer started in August 2018. In addition to the China Model 3 with LG Chem cells, a car with cells from SK Innovation has now also landed on the Chinese government’s coveted subsidy list. 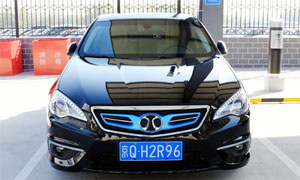 Tesla fighter I: According to Audi CEO Rupert Stadler, the electric Q8 (we reported) with a range of 700 kilometres will come to market in 2017 and feature inductive charging technology. Meanwhile a prototype of the 2015 version of the R8, which is said to come to market as all-electric sports car with 450 km of range, has been spotted at Nürburgring.
auto-motor-und-sport.de (Q8 – in German), autozeitung.de (R8 – in German)

Tesla fighter II: Xu Heyi, chairman of Beijing Automotive Group, said his company has partnered with an unnamed American firm to introduce a new electric car to China by the end of next year. According to Xu, the new EV will “outperform Tesla’s Model S.”
beijing.china.org.cn

Focus update: Ford will present its Focus Sedan in New York with updated exterior and interior. While the drivetrain of the Focus EV will remain unchanged, U.S. customers now have the option of the 1.0-liter EcoBoost engine with a new six-speed manual transmission.
hybridcars.com

China debut: BMW will show the i3 and i8 for the first time in China at the upcoming Beijing show. The press release is titled “market launch,” so it is likely BMW will start offering its i-range very soon.
automotiveworld.com

iShare concept EV: Applus will show its design of an ideal electric carsharing verhicle in New York. The iShare is with two metres even shorter than a Smart and weighs just 530 kilos. Its doors are opened via barcode on the driver’s mobile.
green.autoblog.com (with video)