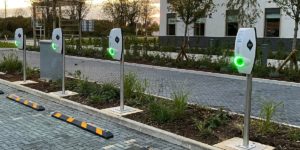 The British National Westminster Bank (NatWest) wants to install 600 charging points at its locations by 2023. The charging points will also be available for use by the bank’s customers. The contract to supply the charging infrastructure goes to the Engie brand Equans.

How many EVs for UK grid? The project “My Electric Avenue” finds that the grid will need to be upgraded when 40 to 70 percent of people in the UK drive electric. The project is also working on “Esprit,” a more cost-effective piece of technology that can regulate EVs charging when demand is too high.
autocar.co.uk, electriccarsreport.com, myelectricavenue.info

Hybrids for Belfast: The Northern Irish city has ordered 30 Van Hool Exqui.City trambuses with hybrid diesel-electric drives. It will be the first right-hand drive trambus in the UK and will go into service from September 2018.
vanhool.be

Mobile H2: Since the density of H2 filling stations in California is still lacking, Toyota is sending temporary hydrogen stations to dealerships to meet demand. The technology is provided by Air Products & Chemicals and one mobile fuelling station can fill about the half of a Mirai’s tank.
carscoops.com, hybridcars.com

Nissan charges Twin Cities: The carmaker’s “No Charge to Charge” programme has arrived in Minneapolis-Saint Paul. It is the 22nd market for the initiative and allows LEAF drivers to charge for free at public chargers for two years after purchase.
automotiveworld.com, insideevs.com

Electric airport: The James Armstrong Richardson International Airport in the Canadian city of Winnipeg has installed eight EV charging stations for public use. Another six stations will follow and will be used to power electric carts to transport luggage between the airplanes and terminals.
winnipegsun.com