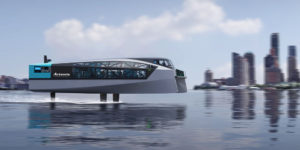 Artemis Technologies, a company based in Belfast, has designed an all-electric passenger ferry to enter service in 2024. The operator Condor Ferries wants to use the hydrofoil as part of a pilot project between Belfast and Bangor in Northern Ireland and is banking on the ferry being fast.

The now unveiled 24-metre EF-24 is an electric vessel for up to 150 passengers. At a speed of 25 knots (about 46 km/h), the ferry offers a range of 115 nautical miles (about 213 kilometres). The developer specifies a top speed of 38 knots (70 km/h). There are no other details yet on the electric drive, battery capacity and charging capability. All that is known is that the electric propulsion system will be a patented solution called Artemis eFoiler.

According to Artemis Technologies, the new development is aimed at the global market for high-speed ferries. The sight on the video and picture material provided is spectacular: The hydrofoil floats largely above the water. Below the water surface, the boat is coupled with an electric drive.

Artemis Technologies is a spin-off of the Artemis Racing sailing team. Its founder is two-time Olympic champion Dr Iain Percy Obe. “We have combined our experience from the worlds of high-performance sailing, motorsports, aerospace, and advanced manufacturing to design and develop an electric propulsion system that is quite simply a game changer for the maritime industry,” comments Obe. “With hydrofoils that lift the boats out of the water, we are dramatically reducing drag.” The submerged electric propulsion system is exceptionally efficient, he adds, as proven by “rigorous testing with our 12m eFoiler® workboat”.

The ferry will be built at Artemis Technologies’ manufacturing centre in Belfast. At the same time, the company is already working on the development of other zero-emission vessels. The company is receiving support from the Belfast Maritime Consortium. At the beginning of 2022, Artemis Technologies has already launched the ‘Pioneer of Belfast’, which, according to the company, is the “world’s largest 100% electrically powered foiling vessel”. The Northern Irish company has also unveiled several electric workboats, including a 12-metre multi-purpose workboat and an equally long crew transfer vessel.