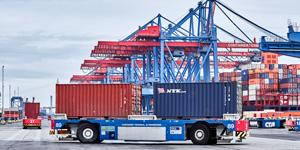 Intelligent charging success: To charge batteries with green excess energy is sensible and economically viable. This is the result of the BESIC research project conducted at Hamburg harbour for 3.5 years. There, ten electric HGV ran with surplus green energy. The key was to develop a smart battery management that ensured charging when environmentally and operationally necessary.
hafen-hamburg.de

Fiat and Google autonomous together: FCA delivered 100 Chrysler Pacifica Hybrid minivans equipped with self-driving tech to Waymo, formerly the Google car project. The move fits Fiat’s plan to reveal a fully electric vehicle based on the Chrysler Pacifica at the CES in Las Vegas.
greencarcongress.com, bloomberg.com

Interoperability validated: Wireless charging bench testing has been completed and proves the interoperability and validity of the SAE TIR J2954. For the first time, interoperability between the so-called Double D (DD) and Circular Topologies has been demonstrated between 3.7 to 7.7 kW.
greencarcongress.com

BMW i3 charges wirelessly at 7.2 kW: Evatran presents its inductive charging system for use with BMW’s electric car in the States. The 7.2 kW system translates to about 20 miles of range recharged per hour and applies to both the i3 and the range-extended version but costs 3,499 dollars.
insideevs.com

Battery-electric heavy goods vehicles: At Hamburg’s industrial harbour, ten electric HGVs have been in operation since 2011 and are transporting containers between warehouses and ships. Now, a new research project called BESIC (Battery Electric Heavy Goods Transports within the Intelligent Container Terminal Operation) aims to develop a system which will charge the batteries of these container transporters mainly at times when the grid has a surplus of renewable energy generated in northern Germany.
portofhamburg.com

Personal-public charge point: The Dutch LeasePlan now cooperates with the Metropolitan Region Amsterdam Electric (MRA-E) to offer customers the option to install a charging station within 300 metres of their home when leasing an EV. The stations will remain public and charge two vehicles.
e-mobility-nsr.eu

Multi-charger certified: ABB announced that their Terra 23/53 fast charger has been certified according to the new EU standard for DC fast chargers. The ABB multi-standard chargers thus comply with CHAdeMO, the CE standard and industry guidelines.
abb.com

Better place for Tesla? In Isreal, rumours of Tesla reviving the obsolete charging infrastructure of Better Place have been spread. At the same time, Israeli company Mobileye, which plans to test its autonomous-driving technology in a Tesla (we reported), clarified that the system will only enable drivers to switch to autopilot very briefly, i.e. to check or write a text message.
greenprophet.com