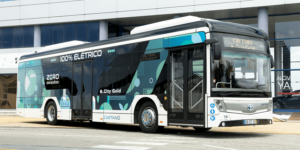 The Portuguese bus manufacturer CaetanoBus has received an order for 30 electric buses from the public transport operator Carris from Lisbon. The 30 e.City Gold buses will join other Caetano vehicles or an earlier model already in operation in the Portuguese capital.

Back in 2019, 15 e.City Gold buses were put into operation in Lisbon. The new vehicles now on order are an upgraded version of the same model with a bigger battery. The electric bus manufacturer says the new order for 30 vehicles is worth 12.7 million euros.

With the increased range that the larger battery allows, Carris should be able to perform the city’s diverse and demanding routes without having to recharge all day. The charging infrastructure for the new battery-electric buses will come from Siemens in the form of 16 Sicharge UC 100 charging stations.

The current generation of the e.City Gold also has an improved air conditioning system, further driver assistance systems, a camera reversing system instead of classic exterior mirrors and warning systems to alert the driver to pedestrians, cyclists or scooters in passages with poor visibility in the narrow city centre.

“We are proud to be the best positioned company in a highly demanding international tender where CaetanoBus battery electric buses were the choice of Carris,” says Nuno Lago de Carvalho, Chief Commercial Officer of CaetanoBus.

De Lijn secures up to 500 electric buses from Iveco