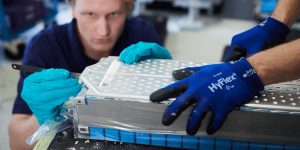 42m pounds for EV battery research in the UK

Four UK-based research projects aimed at improving EV battery technology are to receive 42 million pounds in funding through the Faraday Institution, a government-backed body. Projects include work to examine damage to EV batteries over time, as well as the development of solid state batteries.

Aluminium buses from China: China Zhongwang is developing frames and bodies for electric buses by Brilliance Bus, using mainly aluminium alloy and thus reducing the weight of the buses by 40 percent compared to their steel counterparts. Two prototypes have already been built. The aluminium buses will commence mass production after passing road tests.
greencarcongress.com

Efficient 48 V technology: Continental will present an enhanced version of its 48 V Eco Drive system with predictive energy management at the IAA. Cloud-based road data via Continental’s eHorizon will help increase fuel savings of now 21 percent by another two to three percent.
automotiveworld.com

Solar racer at the start: Cambridge University Eco-Racing (CEUR) will take part in the World Solar Challenge in its solar-powered racer Evolution. Its predecessor had been unable to compete in the 3,000 km race in 2013, as it crashed during road testing ahead of the event.
automotive-business-review.com, uk.cars.yahoo.com, techtimes.com

Most clicked link on Monday was Detroit Electric’s announcement of two versions of the SP:01 electric sportscar.
worldcarfans.com