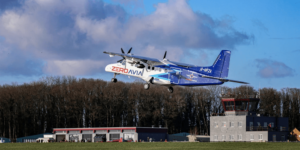 ZeroAvia, an electric aircraft propulsion specialist, has achieved the next milestone as the company announces the maiden flight of its testbed hydrogen aircraft HyFlyer II. The plane took off from Cotswold Airport in England and remains the world’s largest hydrogen-electric aircraft.