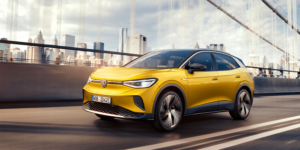 Who offers more range? Renault says the Zoe has a range of 395 kilometres. The Volkswagen ID.4 manages 517 kilometres. And Tesla claims 602 kilometres for the Model 3 Long Range. We know that these distances are possible in favourable conditions. Nevertheless, car manufacturers remain cautious and follow guidelines.

Tesla ramps up production in Europe: Tesla Motors significantly increased capacity at its European assembly plant in Tilburg, Netherlands. 450 instead of previously 200 cars can now be assembled at this location per week. The facility also includes a 750-meter-long test track. Meanwhile, new buyers of the Model X will now have to wait until the second half of 2016 for delivery, according to the Tesla reservation webpage.
carmagazine.co.uk, nltimes.nl, teslamotors.com

On-the-road testing: Following the VW meltdown, the U.S. Environmental Protection Agency (EPA) and the California Air Resources Board (ARB) have announced that they will introduce on-road emission tests for diesel vehicles. Other countries including the U.K., Italy and France are planning to take similar action.
hybridcars.com, greencarcongress.com, theguardian.com

EV from Chile: The two-seater ‘Sôki’ is Chile’s first EV. A very small batch of these subsidised vehicles is set to be produced from next year, each costing 12,000 dollars. The promised range is only 60 km (37 miles), while the 4.2-kilowatt battery is removable.
laht.com, news.co.cr

Next-gen Panamera: The new Porsche Panamera will be unveiled at the Geneva Motor Show 2016. Like the current model, it will also be available as a plug-in hybrid. The main changes will be newly developed and improved drives, as well as reduced weight.
indianautosblog.com

Lexus RX priced: The new Lexus RX Hybrid SUV will start from 47,000 pounds (71,000 dollars) when it becomes available in the United Kingdom toward the end of the year. It will feature a 3.5-litre V6 engine and an electric motor with a combined output of 300 hp.
autoexpress.co.uk

Formula E ‘FanBoost’: Starting in October, Formula E fans will be able to vote for their favourite driver on Facebook, Twitter and Instagram up until the sixth minute of each race. The three most-voted drivers will profit from an even stronger power boost that can be utilized much more flexibly during the than last season.
theverge.com, fiaformulae.com