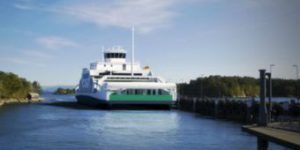 Ampere floats: The first fully electric ferry for cars and passengers has set sail, or better, batteries in Norway. The Ampere was designed as an e-vessel from the start. Siemens provided the electric propulsion system as well as charging stations and batteries, while shipbuilder Fjellstrand made the ship’s body from aluminium. The batteries are charged by hydro power and help the ferry cross the Sognefjord 34 times a day.
maritime-executive.com, siemens.com

Bosch trials Tesla: The German supplier added two Model S to its fleet, both test vehicles for automated driving. Bosch also retrofitted another 50 new components like a stereo video camera. The company has been working with Tesla since 2011, and hopes to further refine automated driving for all kinds of production cars.
automotiveworld.com

Most clicked link on Tuesday was the filmed police check of a heavily overloaded minivan in China. Instead of six passengers, 51 hopped off the bus.
youtube.com