Scooter sharing floats: German Floatility has convinced Singapore to launch a pilot with its solar-powered stand-up scooters at its development partner Autodesk. Their staff will kick about the facility on the partly 3D-printed, three-wheeled and self-balancing EVs, that come with custom-built docking stations to charge. Another pilot is due to start in Vienna in the coming weeks, when tourists will be asked to float around town.
hardwarezone.com.sg, electrive.net (Austria pilot, in German)

Swapping a battery in India shall become most easy as Sun Mobility plans to work together with various OEMs to integrate their solution into electric cars, buses but also scooters and rickshaws. So far, only Ashok Leyland is on board but further steps are to be announced later this year.
ndtv.com, business-standard.com

Hybrid bus order: Massachusetts Bay Transportation Authority (MBTA) expects the delivery of 345 new buses of which 156 will be diesel-electric and 175 CNG. Overall, they will replace a third of the fleet with cleaner options once they arrive next month and shall make the system more reliable, esp. in winter.
bostonglobe.com, metro.us

Ballard scores again: The fuel cell specialist received an order from the SunLine Transit Agency for five FCveloCity systems to power hydrogen buses in Palm Desert, California. The 150 kW systems are expected to be shipped in 2017 and Ballard here works with ElDorado National and BAE System.
greencarcongress.com, ariva.de

eHorizon widens: Continental brings a dynamic version of its cloud based eHorizon technology to CES after previously demonstrating the fuel saving abilities of a static version in its 48-Volt mild hybrid. The dynamic eHorizon uses cloud and crowd intelligence to refresh the digital map in the backend with accurate information.
greencarcongress.com 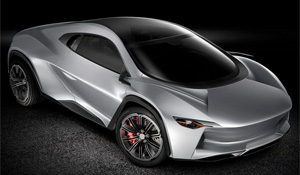 Hybrid hyper car: Italian design house Camal presents the Ramusa (Italian for lizard) SUV concept with all-wheel drive. The hybrid drive is said to have an output of 800 hp, with the electric motor powering the front wheels. The Turin-based firm plans to produce only a few units of its grippy off-roader.
worldcarfans.com, autoevolution.com

3D-printed solar LEV: German start-up Floatility introduces the e-floater, a light-weight electric scooter that runs on solar power. Some components are 3D-printed and the stand-up scooter is ready for production. Developed together with BASF (we reported), the last-mile vehicle weighs only 12 kilos.
techtimes.com, 3ders.org, floatility.com

Coventry electrified: More details on London Taxi Company’s planned facility for building black cabs have surfaced. Chinese Geely will invest 250 million pounds to be able to produce 36,000 electric cabs annually. The electric taxis will first hit the market in 2017 and might even be exported a year later.
businessgreen.com, theguardian.com, standard.co.uk

JLR to expand R&D: Jaguar Land Rover says it will double the size of its current engineering and design centre in Whitley, Coventry. The company claims the expansion is due to increased development of “ultra-low-emission technologies” so expect (partly) electric Jaguars in the future.
autocar.co.uk, gtspirit.com

Toyota heading for the title: Toyota Racing is ready to defeat its two WEC titles and has thus presented its new TS040 Hybrid. The update comes with revised aerodynamics, a new front-end design and changes to the suspension to improve tyre wear. Weight-saving measures have also been introduced.
autovolt-magazine.com

Solar scooter: Together, BASF and Floatility are developing the ‘e-floater.’ Weighing less than 12 kilograms, this solar-powered electric scooter aims at commuters wanting to float on the last mile. BASF will provide various composite and plastic materials which will be used for 80 percent of all components.
greencarcongress.com, basf.com

Most clicked link on Thursday was the Chinese 3D-printed EV which is said to cost just 1,770 dollars.
3dprint.com