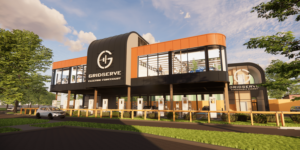 Gridserve has broken ground on its so-called latest Electric Forecourt amidst “multiple global headwinds,” so CEO Toddington Harper. Once completed in 2023, the new high-power charge hub will enable 36 EVs to be charged simultaneously with up to 350 kW. 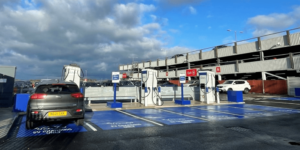 Gridserve is building its ultra-rapid charging hubs in the UK, following plans announced last summer. There are already eleven charging parks under construction, each with six to twelve high power charging points, according to Gridserve. The company expects to finish 20 so-called Electric Hubs by Q2 2022.

The UK airport has launched a car-sharing service with ten electric vehicles and charge points from Bolloré’s BlueCity, building on an earlier trial. The vehicles are part of a larger city fleet, and can be used and dropped anywhere in London.

Electric Gatwick: The London airport wants to become the “UK’s leading low carbon airport” by 2025. That also means it will electrify its entire fleet over the coming 10 years.
internationalairportreview.com, airport-technology.com

More efficient: According to the National Renewable Energy Laboratory (NREL), Proterra’s all-electric buses are four times more efficient than buses running on compact natural gas. The study looked at a pilot scheme in California’s Foothill Transit, where 12 Proterra buses are in service.
chargedevs.com

EV feud: A new bill could put an end to Tesla’s direct sales model in the U.S. state of Indiana from July 1st, 2016. The EV maker blames GM to behind the measure, who responded to the allegations by saying that Tesla should not play by “special rules” when competing against “similarly capable vehicles and similar price points” – meaning the Chevy Bolt going up against the Tesla Model 3.
autoblog.com (bill); autoblog.com (GM)

Vector expands network: New Zealand’s Vector added two more rapid and one standard charger to its network in the city of Auckland. The company also said that it will install at least another 13 fast-chargers in the country over the next six months.
evfleetworld.co.uk

Charging USA: SemaConnect has installed five new charging stations at three The Wiseman Company properties in California. Four stations will be reserved for tenants and local drivers, while the fifth is open to the public. Meanwhile, DC Solar will install six portable, solar-powered EV chargers for the NASCAR weekend in Las Vegan, Nevada, next month.
pressreleaserocket.net (California), pressreleaserocket.net (Nevada)