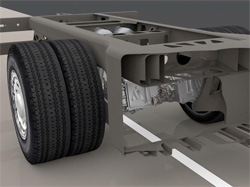 Lightweight frame for e-trucks: Magna will bring a 35 percent lighter frame for commercial vehicles to the IAA. The V4.0 can hold up to three modular battery packs and also offers protected space to install electric motors. The idea is to keep the structure light and space for load clear.
springerprofessional.de (in German)

77m euro order for hybrid components: GF Automotive has received an order from a French car manufacturer for the battery housing of a new hybrid vehicle. Made from aluminum with an integrated cooling system, it will be made in Germany from 2019. The contract is worth 77m euros.
onvista.de

Lion E-Mobility’s largest order to date is from Kreisel Electric. LION Smart has been selected to equip Kreisel Electric’s home storage unit Mavero with the battery management system. A seven-figure sum will be paid over a period of two years.
globenewswire.com

Concept Fire Truck: Austrian Rosenbauer presented its vision of a firefighters’ vehicle. The Concept Fire Truck (CFT) is a compact hybrid vehicle with an electric motor in each wheel. Its ingenuity lies in ergonomics designed to enable fewer and ageing firefighters to still fulfil their tasks.
feuerwehr-ub.de (in German)

Manz lassos new deal: The German engineering company has received a “strategically important” order from one of the “leading companies of the e-mobility industry in the USA” (Tesla?) for a pilot system in which an innovative laser welding process will be used for the manufacture of lithium-ion battery systems. Manz is confident that there will be follow-up orders in the coming years.
finanznachrichten.de

Never late for the gate: The APT (Airport Personal Transport) is essentially an electric-powered, semi-autonomous two-passenger vehicle that will take people from their car to the airport gate and back. The team, with 88-year-old team leader William Alden has started a Kickstarter campaign to raise 100,000 dollars to build the first prototype.
kickstarter.com via clapway.com

Battery research: At the U.S. Department of Energy’s Brookhaven National Laboratory, a team of researchers has developed a cathode material for Li-ion batteries that can allegedly store three times as many lithium-ions as other cathode materials.
greencarcongress.com, bnl.gov

Most clicked link on Tuesday was the new Chevy Volt with its first units now being built at GM’s production site Hamtramck in Detroit.
insideevs.com