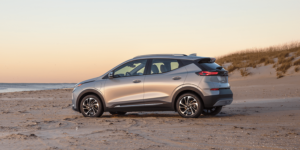 Hawaii to get government fleets off fossil fuels

In the US state of Hawaii, a new law requires the entire government fleet to be converted to electric vehicles. Passenger cars must be electric by 2030, light commercial vehicles by 2035. 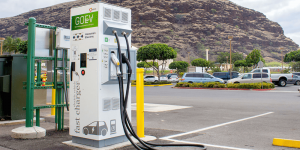 At the second “Climate Mayors Summit” in Honolulu, representatives of more than 140 US cities and counties committed themselves to purchase a large electric fleet by the end of 2020. In addition, the Climate Mayors also want to buy electric school buses. 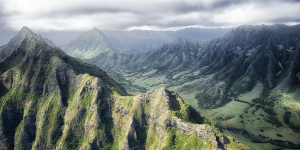 Hawaii to electrify its transport with renewables

The three largest utilities of Haiwaii have released their strategic roadmap that shall lead to transport becoming electric and charged with renewable energy from 2045. The aim is to make the world’s most remote islands independent from fossil fuel imports.

150 kW CCS-charger planned: Partners of Germany’s fast-charging network SLAM announced that it will be possible to charge with up to 150 kW in the future at key junctions along the country’s motorways. Terms of subsidies have been adjusted accordingly – 50 percent of the cost for the installation of 50 kW chargers and 75 percent of the cost for the preparation of 150 kW chargers will be covered. The first 150 kW chargers are said to go online in two years.
volkswagenag.com (in German only)

Hydrogen shuttles for Hawaii: From autumn, two 25-seater hydrogen buses will shuttle tourists to the Volcanoes national park on the island. Even the “Wiki-Wiki” shuttles at Honolulu Airport could soon be fueled by hydrogen.
washingtontimes.com

New EV charging project approved: The City Council of California’s Mountain View said it will install five new charging stations in the California and Bryant Parking structure, as well as upgrade four stations located at City Hall later this year. The fee is set at 1.50 dollars/an hour for the first two hours and will increase to 5 dollars/hour during peak times.
patch.com

Serving electric: Montgomery Country police in the U.S. state of Maryland added three Ford Fusion PHEVs to its fleet that will be used to serve civil papers. Three EV chargers have been installed for the cars in the parking garage underneath the Montgomery County Courthouse.
thereporteronline.com

35 chargers for New Zealand: Company Vector wants to install 35 EV charging station across Auckland. Vector has been offering EV drivers free coffee at its two existing stations to pass the time. The new stations will be a mix of fast- and standard-chargers.
nzherald.co.nz

Massive change in Bangkok? Up to 2,694 of 3,183 buses serving in the Thai capital could be exchanged for electric ones. So far, new buses bought by Bangkok Mass Transit Authority (BMTA) are powered by CNG but new calculations see electrification as the better option, at least in the long run. For the move to become true, traffic minister Prajin Junton needs to nod his approval next week.
bangkokpost.com

Prescribed change in Berlin? The senate of the German capital has passed an energy transition bill which demands all buses bought in or after 2020 to be emission free. Berlin’s public transport provider, BVG, however says, that 2020 is too early as battery-electric or fuel cell buses are not yet reliable enough. Furthermore, BVG pointed out that Berlin is yet missing infrastructure to run a green service.
rbb-online.de, welt.de (articles in German)

United States Postal Service has received quite a few responses regarding the planned replacement (electrification?) of its 180,000-vehicle strong fleet. 15 companies already have expressed interest, among them Daimler, Nissan and Mahindra.
carscoops.com

Parisian fire brigade electrified: Firefighters in the French capital are now testing four BlueCar and two BlueUtility by Bolloré. If the trial is successful, they could become an integral part of the fleet and would be used as service vehicles – painted in red, of course.
avem.fr (in French)

Hybrid learners: British driving school car supplier CA Cars has ordered more than 40 Toyota Yaris Hybrid equipped with dual controls which are to be deployed to driving schools. The latter hope to save money on fuel and running costs.
fleetnews.co.uk, toyota.co.uk

Off-peak programme: Hawaii Energy together with OpConnect has started a new pilot scheme to see if saving money could encourage people with PV systems to charge off-peak. Participants receive a 60 percent discount on charging through the OpConnect network.
chargedevs.com

Twizy for Lyon: The all-electric two-seater by Renault is now being offered as part of Bolloré Bluely carsharing scheme in the French city. A total of 30 are ready for use. Until the end of the year, Bolloré wants to have a total of 110 Twizy to join its Lyon fleet and Bluecub Carsharing scheme in Bordeaux.
greencarcongress.com, renault.com

Massachusetts pushes EV sales: The U.S. state has earmarked an additional two million dollars for its Massachusetts Offers Rebates for Electric Vehicles (MOR-EV) program. It offers a discount of up to 2,500 dollars to those who buy or lease an electric vehicle.
electriccarsreport.com

How much could you save? Hawaiian electric companies have launched an online tool that estimates, how much money a person could save by driving electric. The EV Bill Savings Estimator also takes into account off-peak charging rates.
chargedevs.com

Toshiba bus hits the road: The company’s first electric bus has begun operating in the city of Kawasaki in Japan, along the Kawasaki Municipal Hospital route. The bus is equipped with vehicle-to-grid technology and can be used as a power source in the event of an emergency.
azocleantech.com, toshiba.co.jp

The Clean Charge Network in the the Greater Kansas City region will comprise more than 1,000 ChargePoint stations. Kansas City Power & Light Company, which receives support from Nissan and companies at host locations, will erect and operate the network, letting EV drivers charge for free in the first two years. The installation of the stations began in late 2014 and will be completed this summer.
electriccarsreport.com, businesswire.com, chargedevs.com

Electric parcel delivery in Italy: DHL Express in Italy puts 50 Nissan e-NV200 electric vans to work as part of Deutsche Post DHL’s global GoGreen campain. They will be used for deliveries starting in Milan and Rome with other cities like Florence, Verona, Bologna, Naples, Salerno, Bari and Catania to follow.
automotiveworld.com, logisticamanagement.it (in Italian)

Major SAIC deal: Battery charging supplier STGCON New Energy Technology Company from Shanghai has ordered 1,000 electric and plug-in hybrid cars from the Chinese carmaker SAIC Motor Corp. STGCON will use the Roewe E50 and Roewe 550 cars to set up a car hiring business. Along with the deal, both companies agreed to build charging stations in major Chinese cities.
oemol.com

Charger or charged: A senator in Hawaii wants to fine owners of public parking lots with 100 or more parking stalls with up to 20,000 dollars if they do not install at least one charging point. A law requiring chargers to be set up in public parking lots was passed three years ago, but due to the lack of penalties, it has been nearly impossible to enforce.
bizjournals.com

New H2 filling station in France: Air Liquide opened a new hydrogen fuel station in Laint-Lô in the Manche department. It will at first cater to ten local vehicles and later to an additional 30 from nearby areas. As a reminder, this is the same area in France that will receive 40 Renault Kangoo Z.E. with fuel cell range extenders (we reported).
gasworld.com, airliquide.com

In Hawaii, 1.8m miles of charging have been used by EV drivers at 26 charge points by Volta Industries in the last three years. The company also operates in California and Arizona and now has more than 80 charging stations.
urbanhonolulu.hawaiinewsnow.com

In Washington and Hawaii, EVs made up 1.6% of all newly registered cars between January and November 2013. This makes both the U.S. states with the highest percentage of electric cars, followed by California (1.4%) and Georgia (1.1%).
cleantechnica.com

UK’s going ultra low: The British government just announced to spend 9.3m pounds (15.3m dollars) on the ‘GoUltraLow’ campaign, which is backed by industry leaders like BMW, Nissan, Renault, Toyota and Vauxhall. The funding will be used to install 140 new fast chargers, making it a network of 500 across the country. Another 5m GBP (8.2m USD) will be spent on promoting green driving to the public.
businessgreen.com, thegreencarwebsite.co.uk, gov.uk, goultralow.com (Campaign page)

Tesla leasing in Germany: At an invitation-only event last night in Munich, Elon Musk announced that Tesla will offer the Model S for leasing, partnering with car rental company Sixt. The leasing rate for the Model S will start at about 500 euros (680 dollars) which is just above the rate for a 5-series BMW. Tesla hopes that the leasing option will ramp up annual sales in Germany to 10,000 cars by the end of 2014.
wiwo.de (In German), automobil-produktion.de (In German)

No-charger fine: If Senate Bill 2651 goes into law in Hawaii, operators of large car parks will face a fine when failing to provide dedicated EV parking. From 2015, lots with more than 100 spaces, would have to provide at least one parking space with EV charging capability.
transportevolved.com