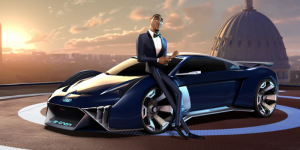 Audi has a new electric sports car. It does build on their upcoming e-tron but the RSQ model packs some extra special features that makes it one of a kind. Yet, do not get your hopes up too high to see it soon – the Audi RSQ is a virtual vehicle.

Green transport: London launched the LoCITY programme designed to reduce emissions of fleet and freight operators. Over the next five years, it will enable networking and create environmental standards, while research and trials will show how to implement low emission vehicles in an efficient manner. The scheme is run by Transport for London to improve air quality in the British capital.
tfl.gov.uk, freightinthecity.com, commercialfleet.org

Wireless buses: Complete Coach Works (CCW) has delivered two electric buses to the City of McAllen in Texas. The retrofitted buses are less expensive than new ones and include a wireless charging system from Wireless Advanced Vehicle Electrification (WAVE).
ngtnews.com

Points for juicing: eMotorWerks announced a new JuicePoints programme that rewards EV drivers in San Francisco for charging during off-peak hours, when the grid is less strained and energy is the cleanest. When plugged in at such times, drivers can collect JuicePoints that turn into electricity credits.
insideevs.com, prnewswire.com

Points for building: Non-profit Yellowstone-Teton Clean Cities is offering a 5,000 dollar rebate to businesses, landowners and government agencies ready to install a Level 2 charging stations on their grounds.
jhnewsandguide.com, ytcleancities.org

Under a palm tree.

Usually the spot to be, this palm tree in Hollywood prove anything else than protective for seven Toyota Prius at a dealership. As the huge palm fell amid a storm it literally took seven in a strike, damaging some and totalling one.
ktla.com