Geely has introduced their SUV concept Icon at the Beijing Motor Show, which is built upon the Volvo XC40 platform and is thus well-prepared for electric or plug-in hybrid transmissions. They also presented the new sedan Borui GE, which is powered by a PHEV motor from Volvo. 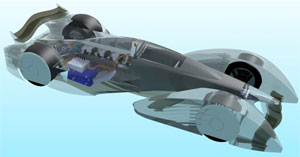