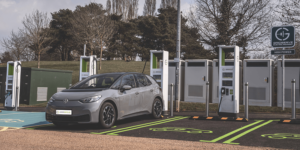 Electric car charging points on the Isle of Wight were hacked to show pornography. Unfortunately, the hacking also put the charge points out of commission, blocking EV drivers from charging their vehicles.

Setting an example: The provincial government of Baden-Wuerttemberg, Germany, has affirmed plans to further lower its county’s carbon emissions. Therefore, a tenth of the ministry’s fleet shall be electrified by 2015. Funding has also been extended to support electric buses and cabs. Baden-Wuerttemberg aims to have 200,000 electric vehicles on its roads by 2020.
mvi.baden-wuerttemberg.de (In German)

E-cabs in London: The 20 BYD electric taxis ordered by chauffeur service Thriev (we reported) are now in operation. London’s first electric cab fleet is expected to be joined by a further 50 cars in July ordered by minicab firm Green Tomato Cars.
businessgreen.com

Avis to include hybrids: The rental car service’s UK branch has now included Peugeot’s hybrid version of the 508 and 3008 in its fleet. The low-emission cars are available to customers across the UK.
fleetnews.co.uk

H2 on the Isle of Wight: ITM Power has received planning permission for five hydrogen stations on the Isle of Wight. Two of four sites will be ready for operation in November 2014. The four land locations will be complemented by one marine refueling station.
fleetnews.co.uk

E-buses for Malaysia: The Malayan transport authority Prasarana Transit has announced BYD as winning bidder to supply 15 electric buses. It is South East Asia’s largest electric bus project so far. The decision for BYD follows a trial of a BYD bus serving successfully in Kuala Lumpur since last August.
puregreencars.com