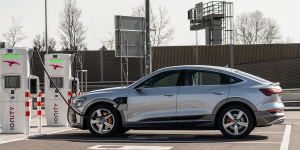 Omar Razzaz, the Prime Minister of Jordan, told all ministries to use electric vehicles. Razzaz even instructed ministers to hand over their government four-wheel drives to the Prime Ministry for use in field trips, as needed, while excess vehicles will be auctioned.

The cooperation between the electric bus manufacturers BYD and ADL has completed it’s order, as 36 electric buses were delivered to public transport operator RATP Dev in London. The Enviro200 EV electric buses, including infrastructure, were ordered in 2017.

PSA partners with Dongfeng: Together, French PSA Peugeot Citroen and Chinese Dongfeng plan an electric vehicle for 2020. Furthermore, they will co-develop a shared platform for compact cars. Nonetheless, PSA will continue its current EV collaboration with Mitsubishi.
reuters.com

Up for the challenge: The start-up NextEV has raised half of the one billion dollars it seeks for its ‘Tesla-fighter,’ winning over Sequoia Capital and Joy Capital as investors. By the end of the year, the company plans to partner with two unnamed car manufacturers for production.
bloomberg.com

3-D printed car ready to order: Local Motors will take pre-orders for the first-generation of its Reload Redacted EV from next month via the crowdfunding platform Indiegogo. Deliveries are set for the beginning of next year, while a high-speed version might be ready by the end of 2016.
3dprint.com, kpho.com Evaluation of integrated electric mobility: In the framework of the new project of the leading edge cluster Electric Mobility South-West “BIE”, cluster partners from industry and research develop supporting systems to enhance the integration and acceptance of electric vehicles. As an outcome, dedicated forecast models will allow, amongst other things, an enhanced range prediction for entire vehicle fleets and provide a comprehensive decision basis for individual users. emobilbw-sw.de

e2o review: This inspection of Mahindra Reva’s electric compact car concluded that it is lifestyle product. Writer Nithyanandh Karuppaswamy describes the e2o is “quirky, “saying that it “appeals to those that question the status-quo.”
rushlane.com

Mysterious supercar: Former Porsche Chief Designer Pinky Lai Ping says he is involved in building an electric high-performance luxury vehicle in China that will leave other European manufacturers “in the dust” and “rewrite” Hong Kong’s history. Ping says he is flying to Beijing to sign the deals to build the vehicle “from scratch” this week. The mysterious supercar is said to be unveiled in the next 12 months.
scmp.com

Mitsubishi plans: According to Automotive News, the Mitsubishi Outlander PHEV will become available in the U.S. starting in May of next year. A plug-in variant of the Outlander sport will hit dealerships there in 2017, followed by the new Montero (Pajero), also available as PHEV, in 2018. The future of the all-electric i-MiEV is not a priority, however.
autonews.com

E-Jag is coming: Autocar quotes insiders saying that Jaguar is planning a whole family of SUVs, including a purely electric model that will most likely be built by Magna Steyr in Graz (we reported). Moreover, the company applied to trademark the name “EV-Type,” as well as a series of patents related to inductive charging.
autocar.co.uk

Tesla stores makeover: Ahead of the launch of the Model X, Tesla is revamping its stores worldwide. New interactive displays focus on safety, autopilot technology, the Supercharger network and dual motors that drive the EV. Meanwhile, not one but two of the upcoming electric SUVs were seen on the open road in California.
mashable.com, driving.ca (stores), insideevs.com (Model X, video)

Jordan exempts batteries from sales tax: The country’s cabinet decided that batteries for electric and hybrid cars will not be subject to sales tax any longer. Just recently, Jordan exempted all plug-in vehicles from custom duties and sales tax, in order to encourage uptake.
jordantimes.com, petra.gov.jo

Cycle Autobahn: Munich revealed plans for a network of cycle highways that would connect the suburbs with the city centre. Commuters could ride uninterrupted by red lights, cars, or crossings. The lanes are thus particularly attractive for e-bikes and s-pedelecs.
fastcoexist.com

London retrofits: British Vantage Power has developed a retrofit hybrid system for buses that will be utilised in the British capital’s double-deckers by 2016. The young company is partnering with UK bus dealer Ensignbus. The hybrid system is geofencing enabled.
eandt.theiet.org

Electric Scots: East Ren Council received over 78,000 GBP in funding from Transport Scotland to install electric vehicle charging points. Five so-called Plugged In Places will offer rapid charging with more being planned at a nearby carpark. Charging will be free, but parking fees do apply.
glasgowsouthandeastwoodextra.co.uk

Jordan update: The country found partners to install 3,000 solar-powered charge points over the next decade. The 120 million dollar deal goes to AllCell, while partners include Hyseo Int. for the solar cells and French DBT. About 600 stations will be fitted with batteries, the rest relies on the grid.
chargedevs.com

Britain’s largest solar carport can be found in Nottingham. The solar tiled canopy provides shade for 40 cars and could to generate 55.7 MWh of electricity per year, which then could also be used to charge electric cars.
edie.net, solarpowerportal.co.uk

Oz to get supercharged: Tesla announced to erect a total of 16 Supercharger stations between Melbourne and Brisbane with the first ten to be standing this year. Furthermore, the California EV maker intends to work with Australian hotels to install high powered wall units at their premises.
smh.com.au

French electrification: French waste management company SEPUR will replace all conventional vehicles at his 17 branches in the Paris region with electric cars. Alphabet France will deliver 61 of what is to become a fleet of 100 Renault Zoe and has already deployed the first 11 last month.
insideevs.com, fuelincluded.com

EV charge points in Ukraine: OKKO has equipped 34 of its 420 gas stations along motorways with charging stations from Austrian KEBA. Drivers of all types of EVs will be able to recharge free of charge.
interfax.com.ua

Jordan will use the power of the sun to promote EV uptake as the kingdom’s government intends to spend 120 million dollars on a network of 3,000 solar-powered EV charging stations. The first 11 will be located in the capital of Amman. Furthermore, import tariffs for electric cars will be waived.
greencarreports.com