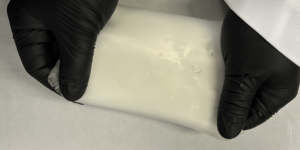 EV testing in Dresden: The Technical University of the Saxon city is currently building a new vehicle test centre for 24 million euros. 15 test benches, four laboratories and one hall for simulation will make the “Institute for Automobile Technology Dresden” (IAD) one of the most modern ones in Europe. VW, BMW and Audi already expressed interest in working together with the university. But first, the TU will help Dresden’s public transport provider (DVB) to prepare the start of its new e-bus line in 2015.
dnn-onlie.de (in German)

Spray-on solar cells: Researchers from Sheffield University have developed solar cells that can be sprayed on like paint, on an EV for example. The cells are made from perovskite and can reach an efficiency of up to 19%. The current prototype reaches 11%.
sheffield.ac.uk

Metal-organic supercapacitor: A study by Korean researchers shows, that metal-organic frameworks (MOFs) can be enriched with graphene and, if made as nanocrystals, be used as supercapacitors. Their new material is said to be stable for more than 10,000 cycles while achieving six times the capacitance of other supercapacitors.
kaist.ac.kr

Hydrogen storage investment: Anglo American Platinum invested in Hydrogenious Technologies, a spin-off of the University of Erlangen-Nuremberg. They developed a method to store H2 similar to fuels by binding the hydrogen molecules to liquid organic hydrogen carriers (LOHCs).
greencarcongress.com

Most clicked link on Tuesday was the news about Mini possibly going hybrid and electric as early as next year.
autonews.com