BMW starts e-scooter production: The production of the battery-electric BMW C evolution maxi-scooter kicked off in Berlin. The plant is working closely together with other BMW facilities in Leipzig and Dingolfing. The latter will deliver the li-ion battery moduls for the e-scooter – the same as used for the BMW i3.
electriccarsreport.com

Bluebird to finally fly: The family run business announced it will debut of its electric sports car at a charity race in September. The race is part of the Dunlop MSA British Touring Car Championship and features celebrity as well as father-son teams. Let’s hope, this time Bluebird will finally have an electric racecar to show.
green.autoblog.com 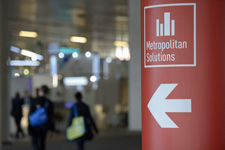 Metropolitan Solutions is the large international platform for your projects in sustainable urban development. A valuable opportunity to exchange information with colleagues from other cities and discuss forward-looking approaches with technology and service providers. Workshops, panel discussions and expert forums with keynote speakers will be held every day. www.metropolitansolutions.de

16t electric truck trial: French logistics specialist STEF has been testing a 16-ton electric truck by Renault for Carrefour. During the 18-month trial, the e-truck ran 16,000 kilometres while delivering 600 tons of goods in Lyon. The 103 kW electric motor is powered by two li-ion battery packs (170 kWh) weighing two tons. During deceleration, the truck could recover up to 25% of the energy used.
greencarcongress.com

Electric cable ferry: For the past six months, the KF Hisary electric ferry has been sailing between Mjanes and Hisary in Norway, without experiencing any mayor problems due to the freezing temperatures. The two winches of the cable ferry are powered by a 100 kWh li-ion battery system by Electrovaya. The ferry is recharged on the mainland between its ten daily round trips and overnight.
electricvehiclesresearch.com