In mid-2019, Ferrari’s first production hybrid car will see the light of the day, says CEO Sergio Marchionne, following the very limited hybrid hypercar La Ferrari. Once the new system gets through testing it will likely power the Italians’ hybrid SUV.

Six new electric VWs by 2025: Auto Motor und Sport reports that the carmaker wants to introduce a new series of electric vehicles from 2019 – three compact and three larger EVs. The NUVe will be the first to hit the road, followed by a Jetta-like car and a crossover by 2020. After that, VW plans an electric SUV, coupé and electric Bulli. In terms of batteries, it seems clients will be able to choose from different sizes.
auto-motor-sport.de (in German)

Olli get production site: U.S. start-up Local Motors will build ist highly automated electric bus in Berlin from early next year. A rent agreement for the 4,000 square metre facility has been signed. Production will begin with a small series of 50 units. If the vehicle gets permission to drive on the road, the Olli could conquer Berlin’s roads street as early as 2017.
wiwo.de (in German)

South Koreans choose E-plates: The government is getting people involved in the choosing of the special license plates for electric cars, which will be introduced next year. For the next eleven days, they can vote for their favourite version on- and offline. First test will kick off on the island of Jeju at the end of October.
koreatimes.co.kr, yonhapnews.co.kr

Hyundai stick to conditions: Next year, Californians can continue to lease the Tucson Fuel Cell for 499 dollars per month, including hydrogen and service. The rate applies to a 36-month lease after a 2,999 dollar down payment.
electriccarsreport.com

LaFerrari for earthquake victims: Only 499 units of the hybrid supercar were to be sold. Now the carmaker announced a 500th unit that will be auctioned off. The proceeds will go to the earthquake victims in Italy. The car is expected to sell for 3 to 4m euros (or more).
carscoops.com

Range anxiety: According to Japan’s Transportation Ministry, Mitsubishi could have falsified milage data for another eight models, including the i-MiEV. That means, the little EV could go less on one charge than officially noted.
businessinsider.de

VW considers second EV platform: According to Automotive News, a purpose-designed electric vehicle platform for top-of-the-line cars is getting more concrete. VW worries whether or not larger models like the E-Phaeton are feasible using the MEB platform – a worry that electrive.com readers are already familiar with, as we already talked about it in our report about the new e-Golf.
autonews.com

New Seat Marbella with electric drivetrain? The Spanish apparently want to breath some new life into their old model for next year, bringing it back as a mini SUV using the VW up! as a base. Thanks to the MEB platform, an all-electric version with a range of 200 km is feasible. Interesting: The Marbella is only available for leasing.
carscoops.com, drivespark.com

LaFerrari Spider to arrive in 2017: Sergio Marchionne as an ace up its sleeve for everyone for whom the hybrid sports car is not already exclusive enough. A technically identical topless version of the 700 kW hybrid will hit the road next year – for “a mere” 3.5m euros, plus tax.
autocar.co.uk

Tesla kicks of new referral round: Until July 15th, Tesla owners who successfully refer a new client can again make 1,000 dollars. Plus, other prizes await, such as custom 21-inch Arachnid wheels at 5 qualifying referrals. And every sale wins the referrer an entry into a drawing for a Tesla Model X P90D with Ludicrous.
electrek.co, insideevs.com 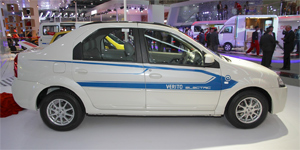 Mahindra brings new EV: With the e-Verito, the Indian manufacturer has electrified its second model. The small limousine will be available in India starting tomorrow. It features a 72 Volt, 30 kW electric motor and is said to run for up to 100 km on one charge.
indianautosblog.com, cardekho.com

Fiat recall: The carmaker recalled 16,549 Fiat 500e in the U.S. due a possible software problem. In some cases, operating conditions could be “misread,” causing propulsion to be shut down. A software update at the car dealer is said to fix the issue.
thecarconnection.com

FCA plug-ins: Chrysler starts production of the Pacifica mini-van in Canada. The PHEV version that is expected to be fitted with LG batteries will be issued in the second half of this year. Its drive will also be used in the Levante PHEV by Maserati in the future. The latter is due to arrive early 2018.
edmunds.com (Chrysler), motortrend.com (Maserati)

Topless LaFerrari: The Italian luxury brand presented a convertible LaFerrari to exclusively selected customers. Supposedly dubbed LaFerrari Spider, it comes with either a removable hard or soft cloth top but keeps the original electric drive system. If build, production will be limited to 150 – 200 units.
leftlanenews.com, worldcarfans.com

“I move”: Yet another electric sports car concept comes from California, as VRS Electric Cars teases the Agito Concept, named after the Latin word for “I move.” Debut is set for the Auto China show next month and production could start by mid-2017. While details are scarce, the company says the concept is near production ready.
worldcarfans.com

Electric buses by Daimler: Mercedes clarified its existing road map for the electrification of its bus business. By 2018, the Citaro will hit the market as an E-Cell (BEV), as well as a F-Cell (FCV).
daimler.com

Super car club Vivendi lives up to its name, inviting people to come and test drive the McLaren P1, Porsche 918 Spyder and Ferrari LaFerrari – all in one day! But this much fun comes with a heavy price tag. Taking part in the Hypercar Holy Trinity 200mph Challenge costs 7,500 pounds per person.
autovivendi.com via worldcarfans.com

X-Tomi Design gave 15 sports cars a new, simpler look. Thanks to digital retouching, we can imagine what a LaFerrari or Porsche 918 Spyder would look like in entry-level edition. But as mothers all over the world keep telling their children – it’s what’s on the inside that counts.
xtomi.blogspot.de

Though it was introduced only last, you can already buy a used LaFerrari with just 100 kilometres on its back. A German online portal offers the supercar for merely double the factory price. A steal considering all 499 units available are sold out – the only question is who is stealing from whom?
indianautosblog.com

EVs for big and small.

2015 looks to be a great year for electric mobility and LEGO fans. The McLaren P1, Porsche 918 Spyder and LaFerrari will all be available for the little yellow guys (and gals). And all LEGO kits include a wrench, because, well who wouldn’t want to look under the hood?
roadandtrack.com, insideevs.com

Video tip: Even Ferrari drivers could need to get used to silence. Even though the manufacturer stated that its LaFerrari could not be driven in an all-electric mode, this video proves otherwise (at least on the first few metres).
youtube.com